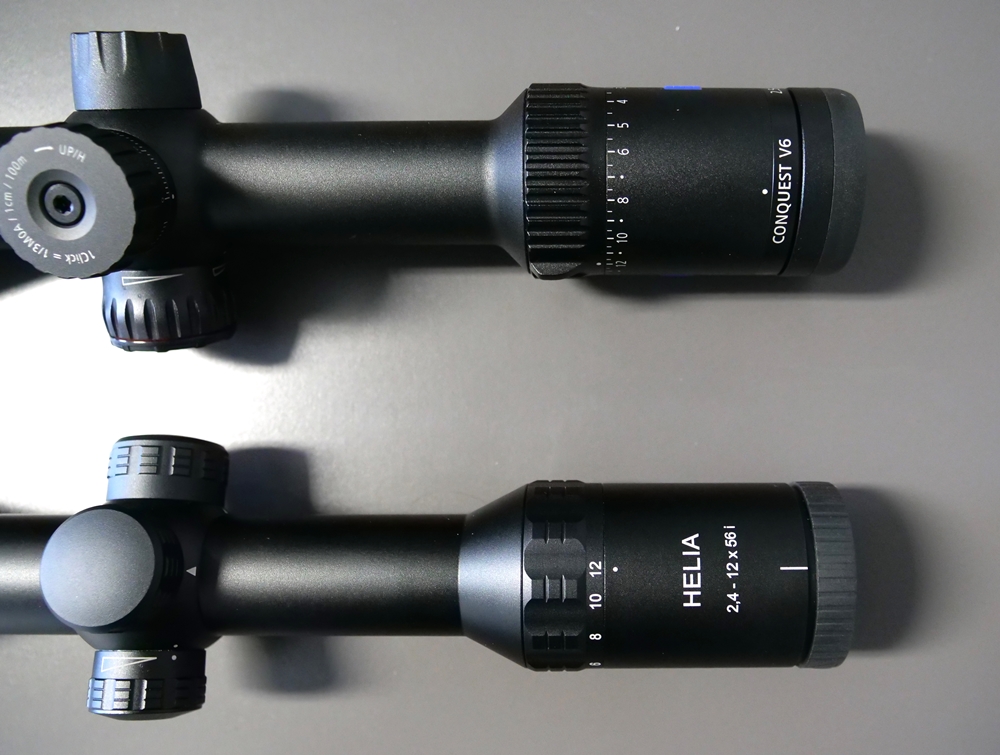 And again we have a battle between two European companies, this time between two well known manufacturers of hunting optics. The first competitor is Zeiss with their fairly new rifle scope Conquest V6, and the second one is Kahles with also a pretty new rifle scope, the Helia. Both rifle scopes in this comparison are designed for low light hunting, and that’s why the smaller magnifications and big objective lenses.

Zeiss is known because of their high-quality optics such as binoculars, rifle scopes, spotting scopes, and in the year 2017 they introduced this new rifle scope called Zeiss Conquest V6 2.5-15×56. This is also one of the first rifle scopes from Zeiss that are not made in Germany, so let’s see how it can be compared against an Austrian made scope.

The second competitor is, like I said, Kahles Helia 2,4-12×56. This rifle scope is, like Zeiss, on the market since 2017, but the difference is that it is completely made and assembled in Austria. Kahles has a great history about the production of various optics, and it is the oldest manufacturers on our planet.

As we can see in the physical specifications, these two rifle scopes are very similar with just a few small differences. For example, the Zeiss is for few grams heavier but is also for few millimeters shorter than the Kahles.

Both rifle scopes feature a 30-millimeter main tube diameter, which is almost a standard in modern hunting rifle scopes. They can also both be ordered with a mounting rail for easier and very precise mounting. Zeiss can be ordered with their ZM/VM rail, and Kahles with a Swarovski SR rail.

These rifle scopes have a fixed parallax at 100 meters, what is, in my opinion, a big drawback, especially if you want to use these scopes on maximal magnification and for precise shots on longer distances. They are both available only in one color – black.

One of the most important features of a rifle scope is definitely the optical quality. With these two, also very small details are noticeable on further distances, but what is important, these rifle scopes are designed for raised hide hunting in low light, so that’s why they feature a big 56 millimeters objective lens.

In the central and edge sharpness, we can see that Kahles has the upper hand. The details were better noticeable with the Kahles in the center of the image and also on the edge. The difference is not big, but enough that our 5 testers saw it. Where Kahles also scored was in the eye-box comparison, but the 5 millimeters longer eye-relief wasn’t noticeable from any of the 5 testers.

Zeiss Conquest, on the other hand, scored in the field of view and inner reflections comparison. The biggest difference against Kahles is definitely in the field of view, on which we were very careful that the testers compared them on the same magnifications, so the results are as accurate as they could be.

So if we make a short summary, the Kahles has a better image sharpness and eye-box, but Zeiss has less inner reflections and more field of view on the same magnifications. I have to say that Zeiss features also more magnification, which also helps to determine details on longer distances. Because of the smaller zoom ratio, we noticed that Kahles is slightly brighter in low light than Zeiss. Whatsoever, the difference is very small, and when the sun goes down the difference is noticeable only in minutes.

From the design the Reticle 60 from Zeiss and the 4-Dot reticle from Kahles are very similar, the one big difference is, whatsoever, in the illumination. The red dot in the Zeiss appears in the middle of the lines and does not shine out of them. In Kahles, the red dot shines directly on the lines, and that’s why the dot appears bigger. In Zeiss, this is possible because their rifle scopes feature glass fiber illumination. Thanks to it, the illuminated dot is much smaller than the dots from any other rifle scopes manufacturer.

Both rifle scopes have a stepless illumination intensity control, which can be simply adjusted with turning the turret on the left side of the rifle scope. The illumination is very strong, so it can be used also during the day.

To further save the battery life, both rifle scopes shut the illumination off if the motion sensor doesn’t notice movement for a longer time.

For this model, Zeiss offers only 1 reticle style and Kahles 2.

Both rifle scopes have the reticle positioned in the second focal plane, which is great for hunting, because on smaller magnifications the reticle is thick enough to see, but is very thin at bigger magnifications for precise shot placement. The illumination in the Zeiss is stronger, and the dot is smaller for more precise aiming. The illumination can be adjusted stepless and is also daytime bright. The reticles are very similar in design.

Because these rifle scopes are designed for hunting, the turrets are capped. The only open turret is the elevation turret on the Zeiss because it is designed as a BDC (Ballistic Drop Compensation) turret. It is possible to get the Kahles also with a BDC turret, but for this, like on the Zeiss, you have to pay extra money. Unfortunately, we had only the Zeiss with this turret, so the comparison of clicks and zeroing isn’t as accurate as it should be. The clicks are in MIL, so exactly 1 cm on 100 meters.

The elevation turret on the Zeiss is designed as a single-turn turret, with 75 clicks in one turn. I think that for any hunting situation this should be enough because with a non-magnum caliber you can easily reach out to 700 meters or even more. What I don’t like on this turret is that you can’t change it with a custom ballistic ring, for easier aiming on longer distances for hunters, that are not so familiar with MIL turrets. The clicks, whatsoever feel nice and are nicely quiet like they should be on a hunting rifle scope. The windage turret, on the other hand, is capped for protection and can be easily zeroed. The cap is made of plastic, what somehow doesn’t have such a high-quality feeling. But, the plastic is made very thick, so the turret is well protected, and I’m sure it can’t break even in an extremely cold environment.

Like previously mentioned, the turrets on Kahles are capped to protect the inner turrets. For most hunters, such a configuration is more than enough, but some prefer the BDC turret on top. This turret can be ordered separately but will cost you 250€. The turrets underneath the caps have a multi-turn design, and the clicks feel decent. The BDC turret for the Kahles Helia has a different design as the Zeiss one because the user can order a custom ring with his own ballistic curve.

Unfortunately, we have only the Zeiss with a BDC turret, so the comparison of the turrets is not perfect. The BDC turret of the Zeiss is good, but also not perfect. It can’t be changed with a custom ballistic ring with bullet drop data. The windage turret is capped but can be also zeroed. On Kahles, the user can also install a BDC turret, which is better designed because you can change the ballistic ring. The illumination can be adjusted stepless on both rifle scopes.

Both rifle scopes manufacturers are located in Europe. Zeiss in Germany and Kahles in Austria. The difference is, that Kahles produces their rifle scopes in their own company, Zeiss, on the other hand, put the manufacturing of some product to Japan to save production costs. This Conquest V6 is made in Japan under the quality control of Zeiss.

The Zeiss Conquest V6 and Kahles Helia were both introduced in the year 2017, so they are fairly new on the market. For both rifle scopes you can get some original accessories like flip-up covers, but nothing more for the Zeiss. Kahles offers also a sunshade and a honeycomb filter for the Helia.

The warranty on the Zeiss is 10 years and 11 for the Kahles. The warranty is long, but also if the warranty runs off I am sure both companies will repair their scopes even after a long time after.

In the start, the Zeiss is for 50€ more expensive, but if you want the whole package with a ballistic turret and a mounting rail, Kahles overcomes Zeiss for exact 90€. For this extra price, you get less maximum magnification, but that’s why a ballistic turret that can be adapted to your bullet trajectory.

Very decent hunting rifle scopes for this price. They both have some great features many hunters would love, and the price is still reasonable for such high quality.

The image quality on both rifle scopes is very good, and especially the illumination on the Zeiss is great. The small dot is easily noticeable during day-time use and very fine adjustable in dusk and dawn. Perfect in my opinion is the locking elevation turret and the illumination turret that shuts off when you push the turret inside. A small drawback is again the elevation turret because you can’t adjust for a custom bullet trajectory.

Kahles is maybe a little bit brighter in lower light, but this is an extremely small difference. It has less maximum magnification, but for that, you get an elevation turret which can be made specifically for your rifle and bullet.

Whatsoever, both rifle scopes have some room for improvement, but you will surely be satisfied with any of these on your hunting rifle.

In this article, we tested optical properties with 8 volunteers, which have no experiences with tactical scopes and have no bias towards any of these two brands. To be exact none of the volunteers even knew any of these two brands before the test. Both scopes were mounted in parallel and people observed trees and buildings about 350 meters away. Parallax was fine-tuned before the test and each person also adjusted the diopter setting for himself. From 7 volunteers 4 were women and 3 were men.