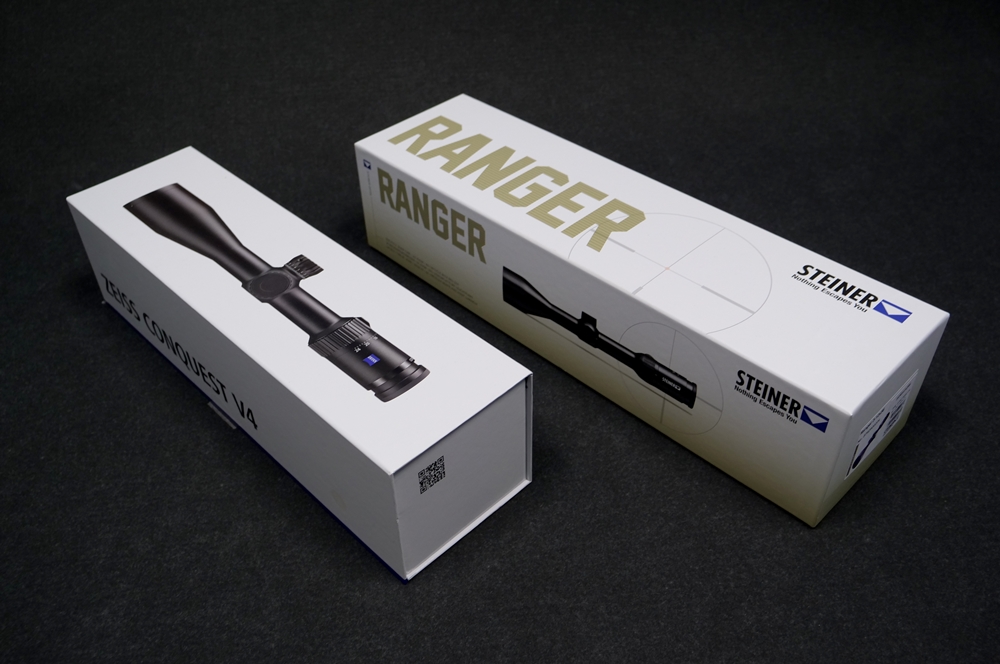 After a longer break, we finally found the time to make a new comparison. This time we decided to make a test of 2 hunting rifle scopes that cost you a little bit under 1000 EUR and are designed for low-light hunting. We came to the decision that we will test the Zeiss Conquest V4 rifle scope against the Steiner Ranger. Both with the same magnification range from 3x to 12x and the same objective lens diameter of 56 millimeters.

Zeiss is a well-known German company which produces binoculars, rifle scopes, spotting scopes, and many other optical devices. They introduced the Conquest V4 rifle scope in 2018, but the difference from their older products is that they are made in Japan and not in Germany.

Steiner, on the other hand, is also a German company that produces many different optical devices. This hunting rifle scope Ranger is on the market since 2015, so we can test how it can compare to a 3 years newer rifle scope.

Both rifle scopes are very similar in the construction with a 30 millimeters main tube diameter. The diopter setting is also similar in the adjustment. Both rifle scopes can be mounted only with rings, and only the color black is available for both models. The black on the Steiner is more matte black compared to the Zeiss, which has a more shinier black.

Even tho they have the same magnification range and objective diameter, the Zeiss is for 31 millimeters longer than Steiner. This isn’t much, but if you want to use a clip-on night vision or thermal imaging device, you would probably notice the difference. Despite the shorter design from Steiner, it is for almost 100 grams heavier.

Both rifle scopes have adjustable magnification from 3x to 12x and a 56 millimeters objective lens. We tested these scopes during the day and in the evening. In the table above is the test we made it in the daytime, where the conditions were great. There were only a few clouds in the sky.

With almost double of the points the Steiner won this test. The biggest difference in favor of Steiner is in the central and edge sharpness, and in the eye-box comparison. In the central and edge sharpness the difference was easily noticeable for most of the testers, and especially on 12x magnification Zeiss got no points. The whole image on the Steiner is better, the details are more noticeable and on the edge, the image is still as clear as in the center of the image on all magnifications.

A similar result was with the eye-box comparison. With a difference from 3 vs 21 points, Steiner won with ease. The difference is quite big, so you can move your eye much more and still get a normal picture.

Zeiss scored big in the field of view comparison. Here the Steiner got only 2 points from 24, but we already expected that because of the specifications both companies offer. The Steiner has a field of view of 12.0 meters at 100 meters and Zeiss 12.7 meters on 100 meters. The difference isn’t big, but is easily noticeable, especially on longer ranges.

When it starts to get dark, every minute is important. Because of that, you need a rifle scope that was designed for low-light. This means it has to have a good light transmission for a bright picture.

In the twilight test, the results were quite similar than in the daytime test in terms of sharpness, and both had a nice bright picture when the sun was down. Whatsoever, there were small differences after a while when it got even darker. The Steiner Ranger was a little bit better than Zeiss, but the difference was noticeable only around 5 minutes until I couldn’t see the target with any of these scopes. To say it short, Steiner is slightly better in low light, but the difference is extremely small.

Both rifle scopes have the same magnification range and the same big objective lens diameter. In the test we made, we came to the conclusion that Steiner has much better image sharpness in the middle and on the edge, and that the eye-box is also better. Zeiss scored in the field of view, which is easily noticeable when looking on a target with both scopes. In the twilight, the Steiner is also better in sharpness, and it is a little bit brighter when it gets dark. The difference is extremely small, but noticeable.

The reticle in both rifle scopes is positioned in the second focal plane, which is perfect for hunting because even on biggest magnifications the reticle doesn’t cover a lot of the target. The reticle 60 from Zeiss and the 4A-I reticle from Steiner look very similar, the difference is only that the reticle from Steiner is a little bit thinner. The illuminated dot, on the other hand, is smaller in the Zeiss, thanks to the optical fiber.

The illumination control on these rifle scopes is similar in design. The Zeiss has 10 intensity settings and Steiner 11. Between every setting is an off position, so you can turn the illumination off near your favorite intensity setting. The turret on the Zeiss is rotating the whole 360 degrees so you can come directly back to the lowest setting. On the Steiner, on the other hand, the turret stops to rotate after the minimal or maximal setting.

For the Zeiss are 2 reticles available to choose from when buying and for the Steiner only 1. The other reticle from Zeiss is named Z-Plex and is also positioned in the second focal plane. The center of this reticle is very thin, so it is perfect for long-range shots on very small targets. The Z-Plex reticle is not illuminated.

The turrets on these rifle scopes are capped, like on most other hunting rifle scopes. These caps serve as a protection against unintentional movement, rain, dirt, and other particles. Under these caps are adjustable turrets for zeroing the rifle scope.

The turrets on the Steiner Ranger rifle scope are adjustable in 0.1 MIL per click (1cm on 100 meters), which is normal for a European made rifle scope. The Zeiss Conquest V4 rifle scope, on the other hand, has turrets that are adjustable in ¼ MOA (7 millimeters at 100 meters), which is fairly new for Zeiss, but since these rifle scopes are made in Japan, it makes sense. I think that this is great also for the US market since many hunters there prefer the MOA clicks rather than MIL. Also the rotation of the turrets on these rifle scopes is different from each other – Zeiss has counter-clockwise clicks and Steiner clockwise.

Since these are hunting rifle scopes with capped turrets, both have small multi-turn turrets underneath. They have no zero stop but can be reset, so you have the 0 position looking towards you.

What really is remarkable in the Zeiss is the adjustment range. It has an extremely big adjustment range of 127 MOA (37,6MIL), which is more than in many tactical scopes on the market. Normally this isn’t needed for hunting, but if you have an older rifle where the receiver or the mount aren’t in the same line than the barrel, a rifle scope with such an elevation and windage range could work.

The illumination turret on both rifle scopes is on the left side, and like previously mentioned the intensity can be adjusted with just turning the turret. Between every intensity setting is an off position.

The turrets have protective caps that protect the scope before unintentional movement, rain, dirt, and other particles. Zeiss, because it is made in Japan, has ¼ MOA clicks and a turret that rotates counter-clockwise. Steiner has 0.1 MIL clicks with a clockwise turret. Both have multi-turn turrets and both can be reset to zero. The turrets of Zeiss are more audible and you can feel the clicks better. Whatsoever, the turret of the Zeiss has a sharp edge, so it is not so comfortable to use. Zeiss has a huge internal adjustment range of 127 MOA (37,6 MIL). Steiner is also available with a BDC elevation turret, but this one costs 130 EUR more.

Zeiss and Steiner are both European companies, with the headquarters in Germany. These products, whatsoever, are not made in Europe. Zeiss Conquest V4 rifle scopes are made in Japan under the quality control by Zeiss and Steiner in the United States in their own production facility.

The Steiner ranger is on the market already since 2015 and Zeiss since 2018. Both have a 10 years long warranty, which is quite long, but I am sure that both will repair their products if anything goes wrong even after those 10 years.

For the Steiner Ranger, you can get original flip-up covers and nothing else. For the Zeiss, you can’t get any additional accessories, which is a little bit disappointing.

Both rifle scopes are from the lowest-priced series from each company. Zeiss is with 999 EUR for exactly 50 EUR cheaper than the Steiner, and the Steiner with the BDC turret is only 80 EUR more expensive.

For hunting rifle scopes under 1000 EUR, I have to say that the price/quality ratio is really high. Both have some great features, but I think that the price of the Zeiss is a little bit too high.

For a lower price, you get a Steiner with a much better image quality from edge to edge, a great reticle illumination, better eye-box, better light transmission, and all together packed in a shorter housing. All these features combined with a BDC turret are only 80 EUR more expensive than the Zeiss Conquest V4 with the illuminated 60 reticle.

Even tho the Zeiss is lighter in weight, has a better reticle illumination and a little bit wider field of view, I still think that this isn’t so much worth as I described above. Additionally, you can get original flip-up covers for the Steiner, and no accessories for the Zeiss.

In this article, we tested optical properties with 8 volunteers, which have no experiences with hunting scopes and have no bias towards any of these two brands. To be exact none of the volunteers even knew any of these two brands before the test. Both scopes were mounted in parallel and people observed trees and buildings about 107 and 189  meters away. Each person also adjusted the diopter setting for himself. From 8 volunteers 2 were women and 6 were men.