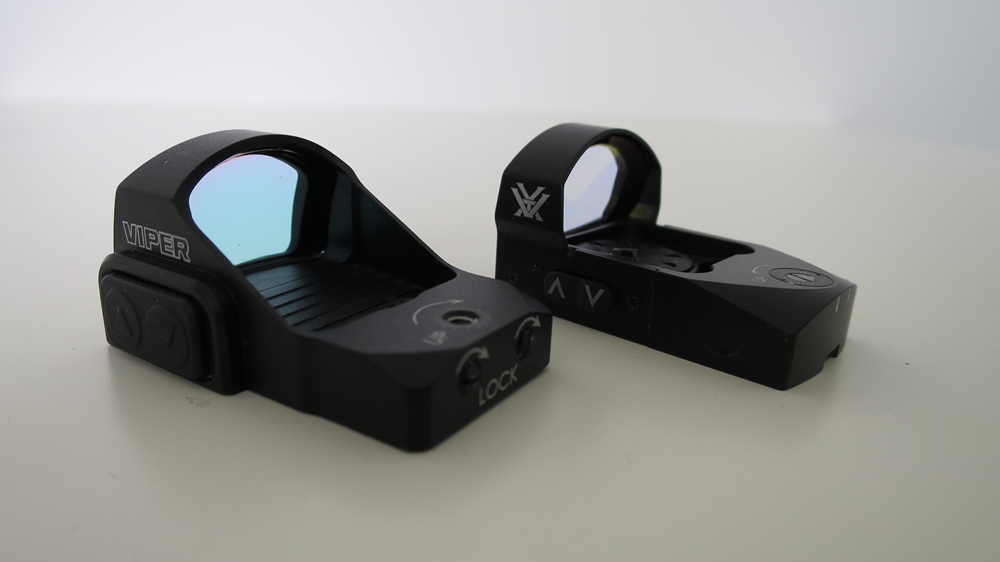 This time, we will be checking out another chapter of red dot sights – pistol sights. We got on our table two Vortex devices, Venom and Viper. Similar name, same manufacturer, same price level, even looking alike – but, could hardly be more different. Why? Let’s find out!

About the same size, the Venom is slightly larger and heavier, and the lens part a bit bulkier, larger, and more exposed (it also does not look as resistant as on Viper). And that is where the comparison of tiny details that lead to an interesting conclusion starts. The slightly larger and protruded lens of the Venom makes it more suitable on bulkier setups (rifle) than on pistols, where the Viper thrives.

Both, of course, look good, as most Vortex devices do. And both come in a similar package with different mounts, batteries, cleaning cloth, Torx keys and screwdrivers for W&E adjustment.

The general selling price is listed the same in most shops that we checked. The two devices come in a similar box, same package, and since both are Vortex, they have the same warranty conditions. They look similar, but there are tiny nuances that set them apart and make them specifically appropriate for two different tasks, which is what sets them apart in the end.

They have the same battery life, but the Viper achieves that with the more common CR2032 battery. Both look rugged but the Viper is more resistant and the lens better protected and sturdier.

The Viper has the battery on the bottom, so it needs to be removed for the battery to be changed. The Venom has the battery on top, which is good as the device does not need to be removed to change it, but it brings a different problem to the table. First, you have a new part you can lose (the cap of the battery compartment). It can also come loose, as it did during my test. It might have been my fault as I might not have screwed it on properly, but it put enough doubt into me to not trust the device fully anymore, as the cap came flying of right towards my face during shooting, and so did the battery, turning off the device. As said, it might have been my fault, but I’d rather not have that happen in a situation where I can’t afford mistakes like that.

OPTICAL PROPERTIES AND THE DOT

As is usually the case with Vortex devices, the lens quality is superb. A crisp, clean image will never get in the way of target acquisition and your sight.

Both come with a simple dot with a manual brightness adjustment. The Viper buttons for that are a bit easier to access, especially when wearing gloves, as they are better positioned and larger, that must be said. Both devices have more than enough windage and elevation adjustment range to zero and for any type of mount and firearms combination.

The Viper comes with a 6 MOA dot, while the Venom has a smaller 3 MOA dot. That makes the Viper faster and more useful at closer ranges, so it is perfect on a pistol, while the Venom with the smaller, 3 MOA dot is a better sight for a longarm.

Just for the sake of it, we tried both devices on both setups, so a pistol (in this case a Canik TP-9 Combat Elite), and a rifle (a Troy SOCC CQB) – as they do come with Picatinny mounts as well. Mounting is simple, and so is zeroing (just make sure you tighten the breaks when you are done, and they will hold zero even with the kick of the rifle).

If used correctly and for the right purpose, the dots are perfect. Now, of course, you can use the 3 or 6 MOA dots on both firearms effectively (depends a bit on the range though), but the smaller dot does perform better on the rifle, and the 6 MOA dot on the Viper is great on a pistol throughout its effective range.

The image is, as said above, great, and the thin edges of the lens protection leave your FOV clear of obstructions, so being aware of your surroundings while target spotting is not a problem, and the dot is nice and ‘on point’.

Both devices are resilient and reliable even with rifle calibers and come prepared for mounting on any firearm you wish, so they are ready for use (we literally just opened the boxes on the range and had everything there for us).

SO, WHICH IS WHICH?

As repeated throughout the review, these are two quite similar devices, and one thing remains certain – they are both really, really good. They perform well, and they offer good accuracy and image quality. For the listed price, it is hard to find something better.

What we would like to conclude from it all is that due to small differences, Viper is better off on a pistol, and is Venom better suited for a rifle or a PCC, but they can both take up any of the two tasks – and they are both outstanding, no matter the purpose.

This featured test is impartial and we always try our best not to prejudice and favor one product over the other. Our team of enthusiasts who tests these products and writes these articles is doing it from dedication, as rifle scopes are our big passion. We also feel a great amount of joy and satisfaction when we know that we have contributed and shared with you our experiences. We try not to be biassed and try to be as accurate as possible when interpreting our sightings. We will do our best to described things as they really are.