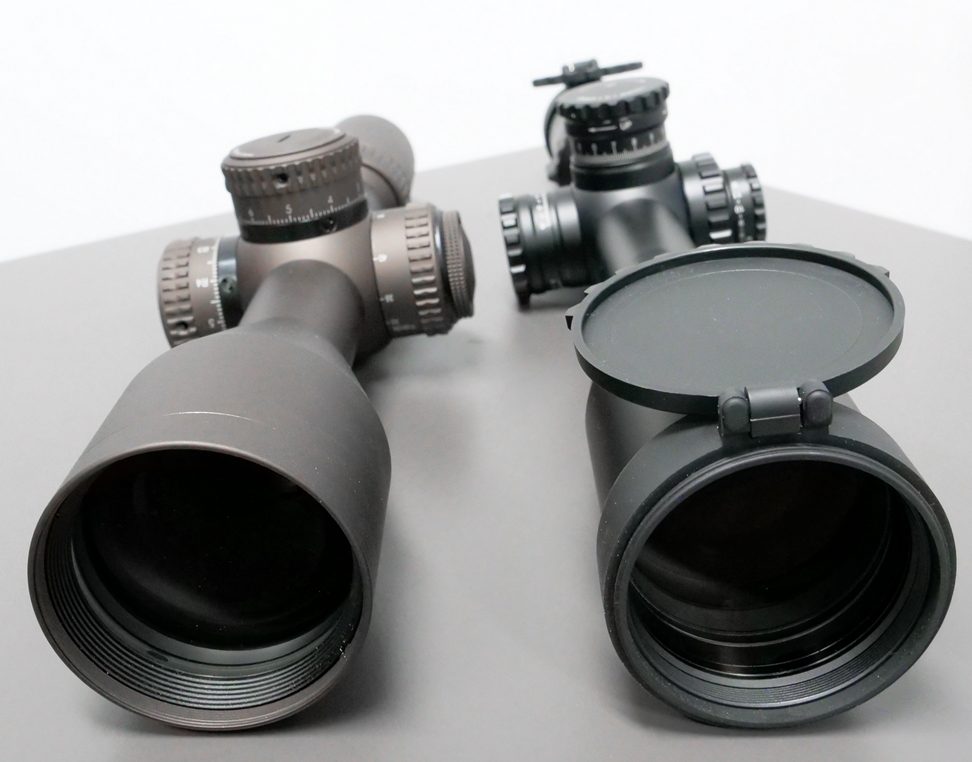 Another review of two high-end rifle scopes, now the flagship tactical model of Vortex, the Razor HD Gen. 2 4.5-27×56, and until Shot Show 2018, the flagship model of Steiner, the M5Xi 5-25×56. We tested the Vortex already against the Kahles, and we can definitely say it is a masterpiece of optics. Now we can compare it to another European-made rifle scope, the German Steiner.

Vortex is a well known US-based company, which produces all of their products in different Asian companies, but their high-quality products come from Japan, like this Razor HD Gen. 2. Steiner, on the other hand, is also a very well-known company, especially because of their high-quality binoculars. The company is based in Germany, but they have also a branch located in the US, where they also produce some models of rifle scopes and other optics. This particular rifle scope we tested is made in Germany.

What we already know, is that the Vortex Razor HD Gen. 2 is one of the heaviest rifle scopes currently on the market, and the same is on this comparison, we see that the Steiner M5Xi is 375 grams lighter than the Vortex. This is very much, but it is also 58 millimeters shorter than the Steiner, what is also a big benefit. So if you are using a night vision or a thermal front attachment, you have to decide if you want a lighter weight combination, or an easier to reach and use combination.

Currently only one color is available on the Vortex, the matt brown finish, and two available colors on the Steiner. These colors are either matte black or coyote brown. The finish on both rifle scopes is hard anodized, what makes these scopes even more durable and also scratch resistant.

Another very interesting test, but we have a clear winner. Almost 4 times more points scored Vortex against his competitor – Steiner. We can definitely say that the differences were big, since the majority of points in terms of sharpness, got the Vortex Razor Gen. 2. Here we have a difference of 38 points against 4.

When we compared these two rifle scopes, we noticed a big difference in terms of chromatic aberration. Also here did Vortex score most points, but this was immediately clear since we first looked with both scopes to a white target. The chromatic aberration on the Steiner is very strong, especially if you look on a white target with sharp lines, and next to it is a different color surrounding. Then we noticed a blue shine that’s coming from the white, which can be sometimes very disturbing, especially if you need to see some details.

Another category where Vortex scored over the Steiner is in the subjective impression of the field of view. Here the difference wasn’t so big, but it still was noticeable.

Just in one category did Steiner get more points than Vortex, and this is in the eye-box comparison. Here did Steiner get the most points, because it is really easier to stay on the target compared to the Vortex.

All in all, 7 of 7 testers would rather buy a Vortex over the Steiner, because they all were impressed about the big difference of the optical quality.

Because both rifle scopes are meant for tactical shooting, is the reticle set in the first focal plane. This is a big advantage against the second focal plane scopes, because making elevation and windage corrections is possible without adjusting the turret, and this on any magnification. Also distance calculations can be done on any magnification, not like on the SFP scopes, where you can correctly calculate the distance only at one given magnification.

The reticle we had in the Vortex Razor HD gen. 2 was the EBR-2C MRAD, which is a christmas tree style MIL based reticle, with a small 0.06 Mrad open center. In our opinion, this is a very good reticle for shooting long range, because you have many holding points for different elevations and windage.

The Steiner M5Xi features a new MSR 2 (Multipurpose Sniper Reticle) reticle, which was designed by Finnaccuracy. This reticle is very similar to the older designed MSR reticle, but they added some features for even easiere usage. Also this reticle is MIL based, and it has a small ranging reticle on the left side, with 0.2 mrad lines for very precise range calculations. On the right side of the reticle are also lines with numbers, which are designed for fast range estimation on human-sized targets.

The turrets on the Vortex are counterclockwise, and clockwise on the Steiner. They both feature a zero stop function, which is exactly on 0 on the Steiner, and 5 clicks under the zero on the Vortex. This is a very nice feature if you are shooting in different locations or different climatic environment, where the zero can slightly change.

Like I mentioned already in the previous post, we really like the turrets on the Vortex, because of the perfect design, the clicks are audible and you feel every single click precisely. This is because of only 10 MIL of elevation in one turn, so the clicks have some space between each other. This is a little bit different on the Steiner, since it has 15 MIL of elevation in one turn, what makes the clicks more sensitive, and you can make more easily one or two clicks too much. But we have to say that also the clicks on the Steiner are very audible and they also feel very good.

Both rifle scopes feature also a turn indicator, what is in our opinion necessary in all tactical rifle scopes. The Vortex has a small pin which comes out under the elevation turret on the left side, so you have a visual and tangible turn indicator. The Steiner, on the other side, has a unique turn indicator, where the entire ring on the turret travels up, and then you see the further elevation from 15 to 26 MIL. This is a very nice indicator, the only problem is in the night, so you have no tangible indicator to feel if you are in the first or in the second revolution. The other question is also, how often do we shoot on such long range in the night that we would really need a second revolution. 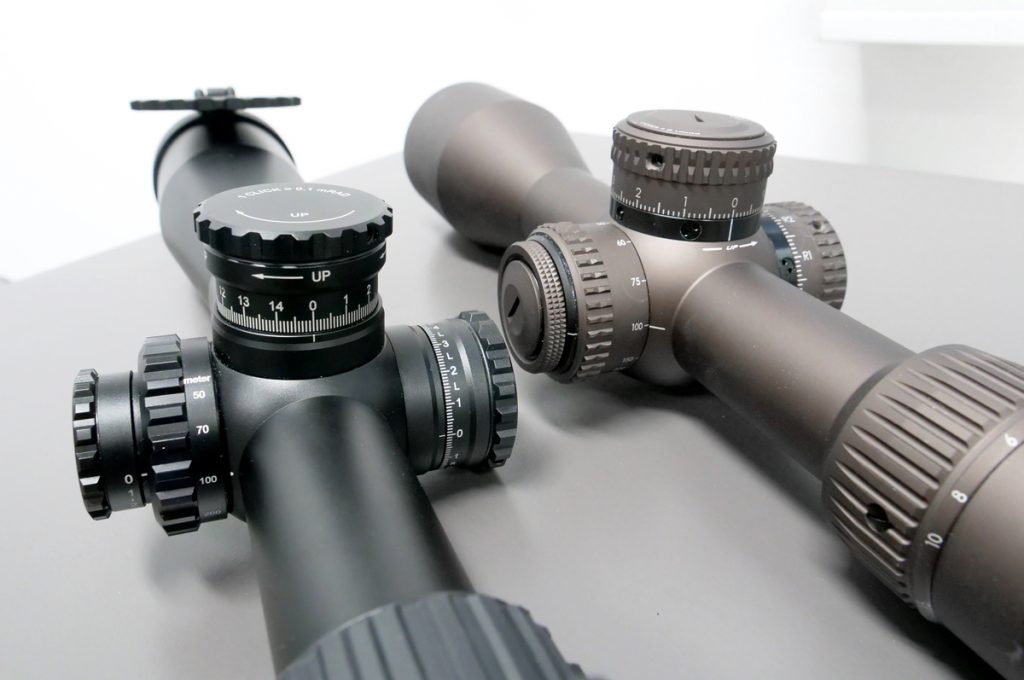 For both rifle scopes are available some accessories, but most of them have to be bought separately. For example, the Vortex comes with a sunshade and the Steiner with original and very good flip up covers.

Vortex is for more than 500€ more expensive than the Steiner, but because of different discounts Vortex is giving, the prices are mostly around 2700€.

Both rifle scopes are built like a tank, and both of them were made to meet all military standards. Some features on these rifle scopes are unique, like the lockable L-Tec turrets on the Vortex, or the very nice turn indicator on the Steiner. The very nice feature in our opinion is also the locking function of the turrets and the illumination control, so you can not change the settings accidentally during transportation.

There are some weight and dimension differences, but this is something we can’t decide what is better for someone or not, so every user has to decide this for himself.

We were really impressed what was the difference in the glass quality, despite the similar price range these two rifle scopes are in.

Both rifle scopes have a very long warranty period, and they both cost under 3000 euros.

In this article, we tested optical properties with 8 volunteers, which have no experiences with tactical scopes and have no bias towards any of these two brands. To be exact none of the volunteers even knew any of these two brands before the test. Both scopes were mounted in parallel and people observed trees and buildings about 350 meters away. Parallax was fine-tuned before the test and each person also adjusted the diopter setting for himself. From 7 volunteers 4 were women and 3 were men.