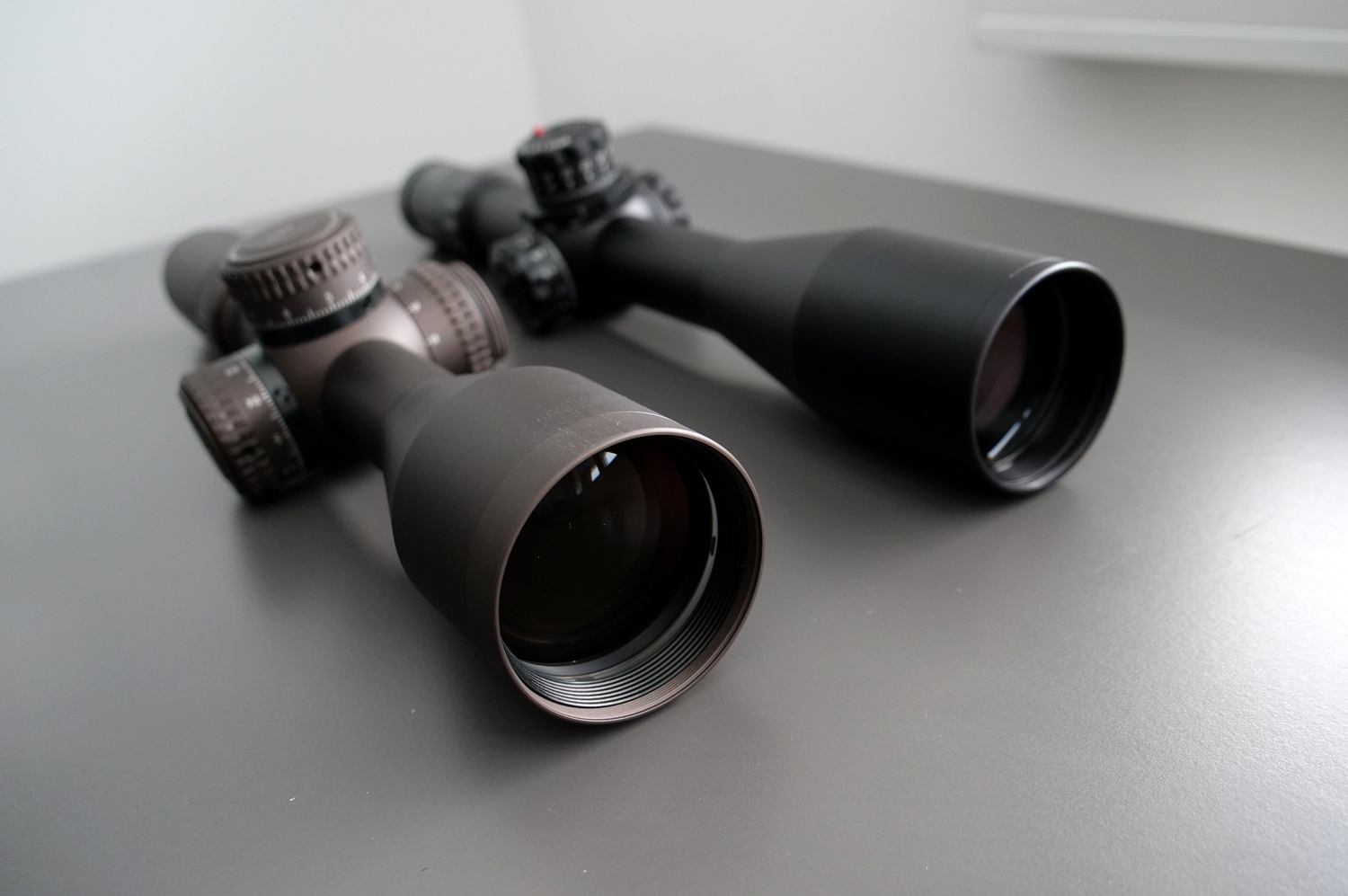 In this review, we compared again the Kahles K624i, which is the flagship tactical model of the company Kahles, and the Vortex Razor HD Gen 2 4.5-27×56, which is the flagship model of the company Vortex. Kahles is an Austrian company, that continuously sets new standards in optical products, and this rifle scope is a good example of their innovations. On the other side, we have Vortex, a US–based company, but their high-quality products are made in Japan. Especially the Razor Gen 2 models are also very rich in features, especially their L-Tec turrets that are lockable at any place. Both of these two rifle scopes are very popular among a lot of long-range shooters, but because of the big objective lens, these can be used also for low-light hunting. Our both test models have the reticle set in the first focal plane, which are miliradian based reticles, and the clicks on both are in 0.1 MIL of adjustment. This means, they are true MIL/MIL tactical rifle scopes.

The first and major difference we see here is the big weight difference. Vortex is almost half kilogram heavier than the Kahles, 425 grams if we are correct. This is really a lot, and you will surely notice the difference on your rifle if you mount the Vortex or the Kahles. Where Vortex points is the length, because it is 39 millimeters shorter than the Kahles. So if you want to mount a thermal or night-vision attachment, then the Vortex is definitely a better solution because of the distance you have to the clip-on device.

The main tube diameter is on both 34 mm, and the entire scope body is made from a single piece, which means they are build very robust to withstand every torture it will be made to them.

Vortex has a unique matte brown color, and currently, they do not offer the scope in other colors. Kahles, on the other hand, has two color options, in matt black or sandy RAL 8000.

When we come to optical properties, we have a tie. Both rifle scopes scored a total of 52 points of 96 in total, but both of them have some strengths and weaknesses. In the central sharpness, Kahles scored just 2 points more then Vortex, and this only on 14x magnification.

On the edge of the picture on 6x magnification, Vortex got 7 of total 8 points, so here we have a clear winner. On Bigger magnifications on the other side, Kahles scored few more points over Vortex.

The biggest difference in the optical properties of these two high-end tactical rifle scopes where the inner reflections. Vortex scored here the most points over Kahles, because on the snow it was clearly visible how a small blue reflection goes from the white. On the Vortex it was also visible, but not so much like on the Kahles. We think that the chromatic aberration on the Vortex is slightly better than on the Kahles.

Also the eye-box is slightly better on the Kahles, which is noticeable on both, low and high magnifications. Because of all optical properties, 3 volunteers would choose Vortex and 5 would choose Kahles.

Both rifle scopes have milliradian based reticles, which are located in the first focal plane. This means, the reticles can be used for calculating the distance to the target, making corrections for wind and also elevation.

The reticle we had in the Kahles was SKMR3, which has a minimal line thickness of 0.036 MIL. The EBR-2C Reticle in the Vortex is also a christmas tree style reticle, but it is a little bit thinner. The thickness of this reticle is 0.03 MIL, and in the middle, there is a free space of 0.6 MIL.

Kahles has 5 different reticle styles for more variability to choose from than the Vortex, with only 3 options. Both have also MOA-based reticles, and if you choose an MOA reticle, also the turrets will be in MOA.

When we come to the turrets, we have to say that the turrets from Vortex are one of the best we had in our hands. The clicks feel perfect, are audible, and the spacing between each click is big enough so if you want to make only one click, you will not jump over it. This is possible because of the smart decision Vortex made, to make only 10 MIL of elevation in one turn and not more. Another nice feature is the locking mechanism, which enables you to lock your turrets on any adjustment you wish. To make an adjustment, you simply pull the turret upwards (or sideways for the windage) make your adjustment, and push the turret back down (or you let the turret in the upper position). The elevation turret is a multi-turn style turret, with an incredible elevation range of 33 MIL. For every full rotation, a small pin pops out more and more on the left side of the turret, so you have a visual and tangible turn indicator.

Kahles on our other side has normal exposed tactical turrets that are not lockable. The elevation turret is a double turn style turret, with 14 MIL of adjustment per revolution, and a total elevation range of 25 MIL-s. Because of the big difference in the clicks per revolution, are the clicks much tighter together than on the Vortex. But, even if they are tighter together, they also feel very tactile and are audible.

Another difference is the parallax adjustment, on the Kahles it is located under the elevation turret, which is unique and only Kahles makes it that way. This position is very comfortable to use for both, left and right-handed shooters. The parallax on the Kahles goes from 50 meters to infinity, and it has marks for different distances in meters. The reticle illumination on this particular model is on the left side of the rifle scope, but you can also order the same rifle scope with the windage and illumination turret swapped for even more comfortable use.

Vortex, on the other hand, has a more traditional style parallax turret on the opposite side of the windage turret, but in this turret also the reticle illumination is built in. The parallax on the Vortex goes from 32 yards (29 meters) to infinity, and also Vortex has marks for different distances.

Both rifle scopes represent the highest quality both companies are capable of, the only difference is that Kahles makes their scopes themselves at their facility in Austra, but Vortex, which is a US-based company, makes their scopes in Japan.

For both rifle scopes many additional accessories are available, such as scope covers, sunshades, throw levers and so one.

One big difference between these two scopes is the warranty, because Kahles offers a 10 years long period and Vortex incredible 30 years. For tactical rifle scopes, which are mainly used on sniper rifles with high recoil, this is really a lot. In terms of warranty, Vortex is very famous because of their VIP Warranty, because they will replace any product with a new one without repairs. But also Kahles has a very good warranty, even after these 10 years they will still provide good customer service and repair your products.

When we come to the price, we see that Vortex is much more expensive than Kahles, but mostly the price is much lower because of different Vortex discounts. On Optics-Trade.eu we found a price of 2.729€, which is almost 1000€ cheaper than the MSRP price.

Both rifle scopes are a top-notch choice for field use, and both have some very nice features that are usable in tactical situations and even hunting. What we really like on the Kahles is the parallax wheel, which is on a perfect location for both, left and right-handed shooters. The option to choose where you want the windage and illumination turrets is another big benefit from Kahles, so every shooter can order a rifle scope which is suitable for its personal needs.

When we compare the Kahles against the Vortex, we see that Vortex offers much more features for almost the same price. The turrets are, like I told before one of the best currently on the market, and they have all the features a shooter can need. The locking mechanism is very nice and smooth to use, the pin which pops out is also easy to see and feel, and if you wear a rifle on your back you don’t have to worry that the turrets turn accidentally. Also the elevation range is much bigger, so ELR shooters don’t need such a big scope inclination like they would with a Kahles. Because of all those features, we think that Vortex is a slightly better scope for tactical applications, but the 425 grams are very noticeable if you have the rifle on your back for the whole day.

In this article, we tested optical properties with 8 volunteers, which have no experiences with tactical scopes and have no bias towards any of these two brands. To be exact none of the volunteers even knew any of these two brands before the test. Both scopes were mounted in parallel and people observed trees and buildings about 350 meters away. Parallax was fine-tuned before the test and each person also adjusted the diopter setting for himself. From 8 volunteers 3 were women and 5 were men.