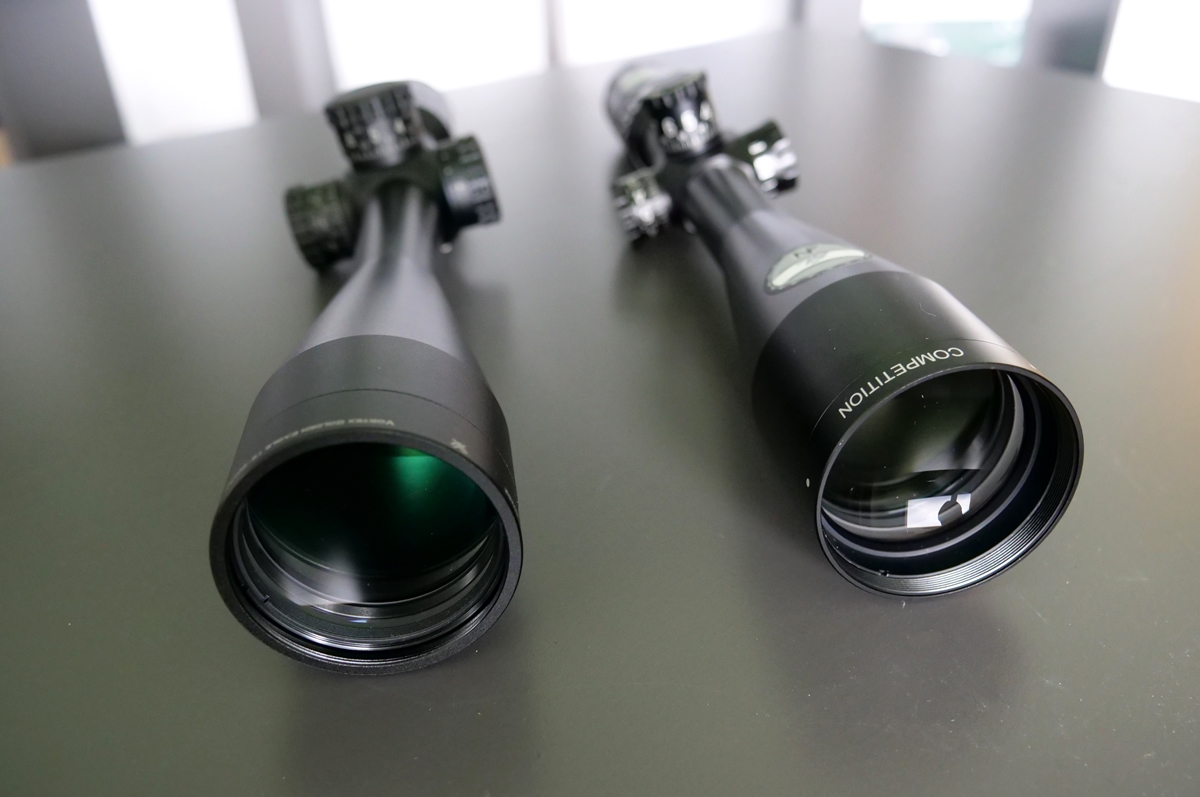 In this comparison, we have 2 US – Based companies which introduced big magnification rifle scopes for target shooting and F-class shooting in the last years. Now we finally have both of them at one place, so we can make a comparison how these two differ from each other in various points. These two rifle scopes are the new Vortex Golden Eagle 15-60x52, and Nightforce Competition 15-55x52.

Nightforce is already well known in the sport shooting community because of its successful predecessors, but now they have a new competitor, Vortex. Vortex is also a very known optics manufacturer, but with the Golden Eagle, it is their first trie to succeed in the F-class competitions and other target shooting sports.

What we see here, is that these two rifle scopes are almost equal. There are very small differences in the magnification range, where Vortex offers 5 times more magnification with 60x against 55x with the Nightforce. The minimum magnification and the objective diameter is on both scopes the same.

Vortex is for 52 grams heavier, what is almost not noticeable. But, if you have a really heavy rifle, and need a lightweight rifle scope for not exceed the weight limitations, this can be a small advantage.

For the length it is not worth to mention, because when we adjusted the diopter to our eyes, we hade both – once was the Vortex longer and once the Nightforce. But every time the difference was maximal 2 millimeters.

The last but small difference is in the parallax adjustment, where the minimal adjustment on the Vortex goes slightly lower to 13 meters against 23 meters on the Nightforce. So actually you could shoot on 13 meters with 60 times of magnification. 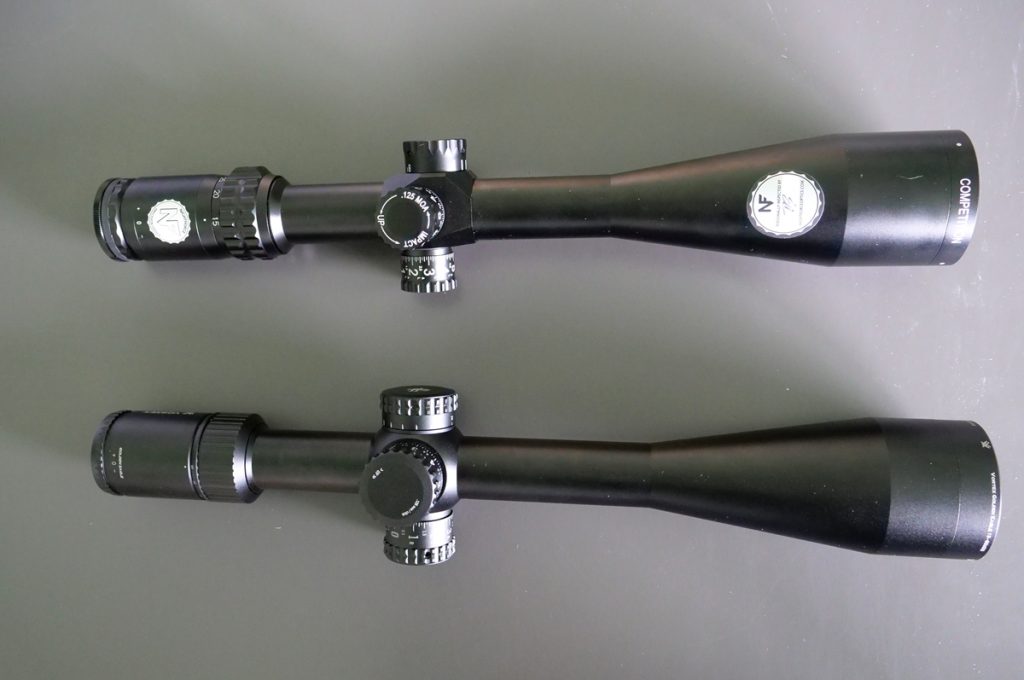 Like previously mentioned, the minimal magnification on both rifle scopes is with 15x times the same. The maximal magnification on the Vortex is 60x and on the Nightforce 55x. The field of view is also very equal, the differences are just in centimeters, but this mostly isn't very important on a target scope. A noticeable difference between these two scopes is in the eye relief, which is much bigger on the Vortex. This is a handy feature, especially when shooting strong recoiling caliber weapons.

In our optical test, we have a clear winner. From a total of 91 points, the Nightforce scored 69, what is 47 points more than the Vortex. In all categories, except one, did Nightforce get more points than the Vortex. The only category where Vortex scored was the subjective impression of the field of view, and this only at the 55x magnification, with only 1 point more then Nightforce.

To compare the central sharpness we have looked on different targets, and we noticed that with the Nightforce the picture was crisper, and the details were more noticeable. The same was also with the edge sharpness, where we got equal results.

Both rifle scopes have some inner reflections, which are noticeable only in bright sunlight, if the target is white with a sharp line to another color. These reflections are visible like a blue shine which goes from the white, and this was a little bit stronger on the Vortex.

The eye-box on both magnifications is also better on the Nightforce, especially on the bigger magnification you have to be very centered to have a clear picture on the Vortex.

Because these two high-end target shooting rifle scopes are designed to make the smallest groups at longer distances, they have the reticle positioned in the second focal plane. This is very necessary because of the thickness of the reticle, so it is very thin even at the biggest magnifications. That's why the reticle doesn't cover a lot of the target and you have a clear picture without any disruptions. For benchrest shooting and F-class shooting you normally don't need a reticle illumination, and because of this, both rifle scopes are non-illuminated.

The reticles we had are both very thin, with only 0.016 MOA of reticle coverage at the magnification 40x at 100 yards. In the Vortex, we had an SCR-1 Reticle, which is a simple crosshair without any other lines, just vertical and horizontal.

In the Nightforce on the other hand, we had an FCR-1 Reticle, which has many vertical and horizontal lines with numbers. This reticle is also MOA based on 40x magnification, so on this magnification, the turrets and the reticle are matched.

Like previously mentioned, both rifle scopes are very equal in the construction, and so is it with the turrets. The small difference between these two scopes is only in the size, because Vortex turrets are a little bit bigger. Both rifle scopes have exposed tactical turrets, and the click value on both is .125 MOA, for very precise adjustments.

Because both turrets have 10 MOA of adjustment per turn, are both of them multi-turn turrets, with only a visual turn indicator under the turret. The entire elevation range is 55 MOA or 16 MIL, so for shooting on longer ranges, we would recommend a canted base or mount.

With both rifle scopes you get an additional windage turret with a different style of markings, so you can choose which is the best for you.

What we have noticed on the turrets from Vortex, is that the clicks feel different after few turns. At the beginning, the clicks were heavier to turn, and the clicks did not feel well. But after we tried out the rifle scope and were going few times up and down with the elevation, the clicks started to be more audible and the feeling was also a lot better. We think that this is because of the oil which is under the turret, which prevents dust and water to come underneath. This was very different with the Nightforce, since the clicks are nice audible and they feel just perfect. 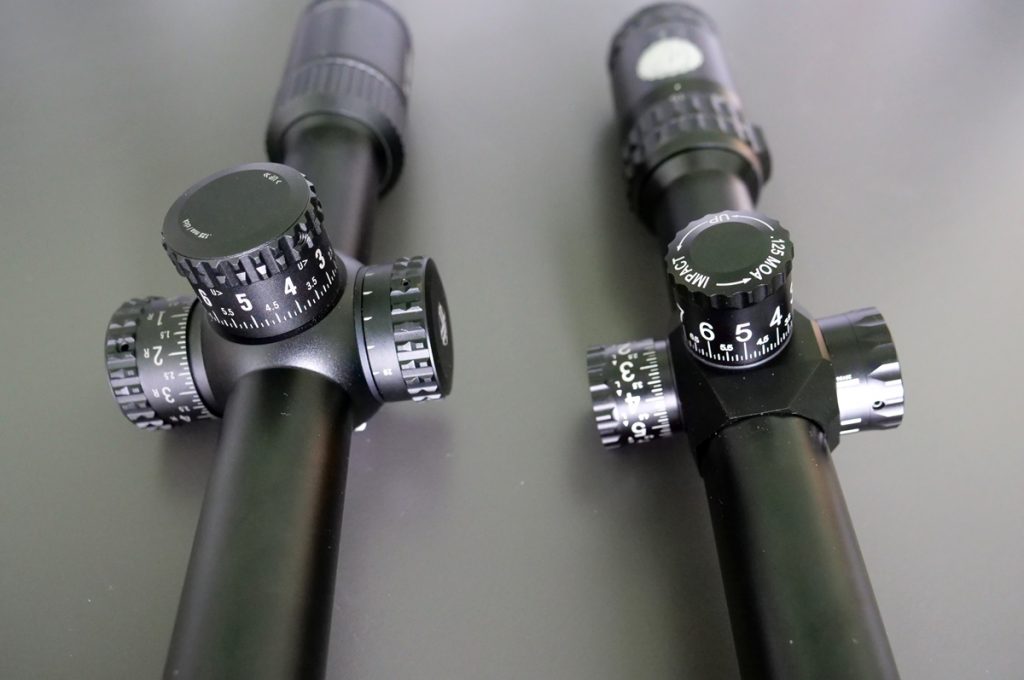 Both companies are based in the USA, but both rifle scopes are made in Japan. The difference in these two companies is that Vortex produces all their optics in Asian companies, Nightforce on the other hand, makes their products only in Japan, or in their own facility in the USA.

For both rifle scopes we tested, many additional accessories are available, such as sunshades, flip up covers, cleaning kits and more.

The warranty on the Nightforce is 30 years long, what is really a lot, compared to 10 years on the Vortex. But, how much we know Vortex, there shouldn't be a problem if you have some defect in the scope after these 10 years, because of the well-known VIP warranty from Vortex.

The biggest difference between these two precision rifle scopes is in the price. Now we finally see why the big differences in the optical properties, since the price difference is extremely high. For the price of one Nightforce, you almost get 2 Vortex scopes, with all other functions similar to the Nightforce, except the optical clarity.

Both rifle scopes are very similar in the construction, and both are capable of shooting on longer ranges and make small groups. On the outside, both look very similar, the small difference is in the turrets size, where the turrets of the Vortex are a little bit bigger. Everything else is not worth to mention, since this is just the personal taste.

When we come to the internals, we can surely say that the build quality on both rifle scopes is on the highest level possible. The clicks feel perfect and are audible, the parallax turret and the magnification ring on both are smooth and precisely adjustable.

The biggest difference between these two rifle scopes, is in the optical properties. This difference is really big, since 6 of 7 of our testers would rather buy the Nightforce than the Vortex. But we have to consider that the price difference is also very big, and the question is if the better picture in the Nightforce, is worth the additional 1700 euros.

And the last feature we have to mention is the extremely long warranty period of Nightforce, which is 30 years, instead of only 10 from Vortex.

In this article, we tested optical properties with 8 volunteers, which have no experiences with tactical scopes and have no bias towards any of these two brands. To be exact none of the volunteers even knew any of these two brands before the test. Both scopes were mounted in parallel and people observed trees and buildings about 350 meters away. Parallax was fine-tuned before the test and each person also adjusted the diopter setting for himself. From 8 volunteers 3 were women and 5 were men.