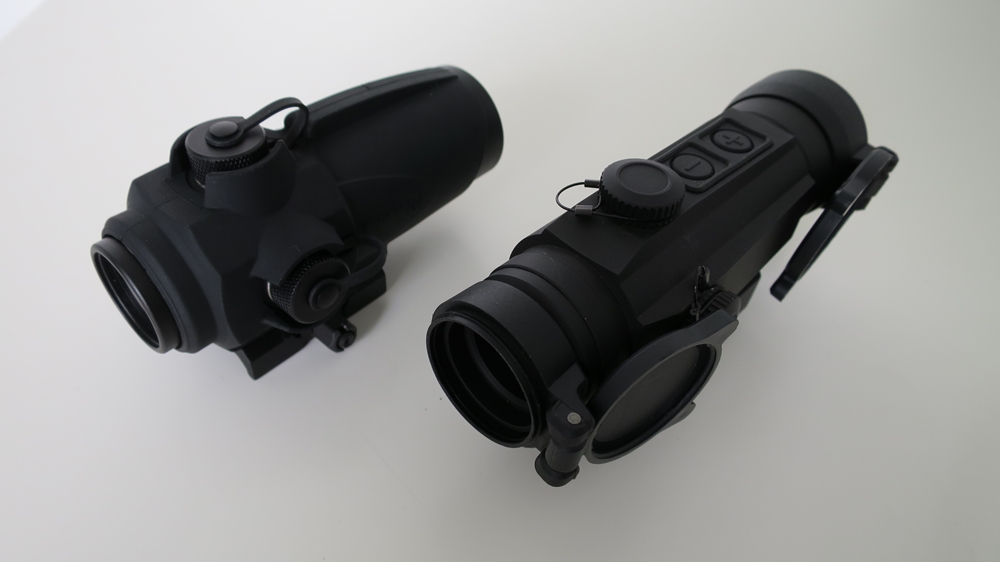 This time, we have on our desk two reasonably priced and highly interesting red dot sights, the Sightmark Wolverine 1x28 FSR, and the Holosun HS402D. Sightmark has headquarters in the US while Holosun is based in China. Both companies are fairly well known. While Sightmark produces a wide variety of shooting optics including rifle scopes for any occasion, Holosun focuses on technologically advanced products. Besides red dot sights, they also produce AN-PEQ systems, lasers and similar, and such knowledge also results in some nifty innovations on their red dots. Below, we describe the main features of both sights, compare them, and try to figure out the good and the bad parts. But we don’t stop there. We also took them to the range, slap them on an AR rifle chambered in 5.56x45 just to see how they behave.

Package-wise, both sights come nicely packed. The Sightmark comes in a sturdy box with foam inlays, while the Holosun is packed into a plastic box with custom cut foam inlay, resulting in a nice and safe storage solution. The Wolverine comes with detachable rubber lens covers. The Holosun comes with spring-loaded flip-up lens covers. Both sights are fairly big, in all proportions. Not something one would put on a compact rifle, but more than appropriate for competition or hunting. The Wolverine is a bit bulkier but shorter, while the Holosun tube is lean yet long. The weight of both sights is about the same, nothing excessive. Holosun comes with an adjustable QD-mount that enables the user to place it on the rifle exactly where he wants it, while the Sightmark has a standard, ‘screw-on’ Picatinny mount.

It needs to be said that at a glance, both devices offer about the same service. Both are very affordable and are in the lower tiers of the price range (for what can be called a useful sight; there are, of course, incredibly cheap products out there but they are hardly useful at all and are not part of the discussion). The dot is the same size, the weight and size are roughly there, and so is the battery life, at 50.000 hours claimed by both manufacturers. But that is where the comparison more or less stops. First is the battery, and the claimed working-hours. The Sightmark uses an AA, while the Holosun uses the standard CR2032. Both should last about 50.000 hours, which is a lot, but Sightmark clocked theirs in on mid-settings, while Holosun’s claim is made for a low light setting. Sightmark’s battery can easily be accessed by unscrewing the cap, while one will need a screwdriver to open Holosun’s battery compartment. Not that one will be doing that often with either. Both devices are a standard, tubular sight, and come with lens covers. They are rugged and the two manufacturers claim they will withstand both shocks, impact as well as water and humidity. They do look durable, and while the Holosun does not look fragile, far from it, the Wolverine especially seems like it can take a rough beating. The warranties are more than necessary, 10 years for Sightmark, 5 for Holosun (3 for the electronics), which is generally an expected lifetime for such a product.

Now as with every red-dot, the claim is the devices are parallax free, and these two stick with that as much as any other sight out there. Of course, when you pay more, you generally get more, but the parallax with all such sights is so negligible, it is not really worth mentioning. The two devices come with good lenses, making the image clear and sharp. Nothing shocking, but more than satisfactory. What needs to be pointed out is that the lenses on the HS402D are nice and clear throughout the whole surface, while Sightmark’s lenses are a bit blurry and distorted on the edge, if one pays attention. It is nothing that will bother the user all that much though. In both, the lenses are also tinted slightly, so as to give a better contrast of the dot on the background, but not so much as to obstruct the light passing through the tube. This is not visible in the Wolverine, but Holosun’s lenses are tinted more than usual, and in good lighting conditions, the blue tint is clearly visible with the naked eye, giving a better contrast of the dot. As tubular sights with a normal sized exit lens, the field of view is good on both, narrowed down a little only by the fact that for such a small lens, both devices have quite a long tube which 'close' down the FOV a fraction. The clicks are the same on both, 0.5 MOA which is a good click value for any use and one can zero it in perfectly. Holosun has a satisfactory span of adjustment at 50 MOA for both windage and elevation, while Sightmark’s span is incredible, at 120 MOA. Both devices have a good range of brightness settings, offering the advantage of adapting to all lighting conditions, and both are also compatible with NVDs.

Both devices have a small and accurate 2 MOA dot with fully adjustable brightness settings that allow the user to set the dot to a level that suits him and the environment best. The 2 MOA dot is just the right size not to be too tiny in a close quarters situation, allowing fast target acquisition, but small enough to be accurate even at greater distances or on smaller targets.
The dot on the Wolverine is a bit smudged even at lower settings, and even more so at higher levels. The main problem is that the whole rim of the lens flares up in red light at high settings, which is rather annoying. The Holosun, though, has an exceptionally fine and defined dot. It is highly visible (this needs to be, to some extent, attributed to the stronger tint of the lenses used by the company) and stays sharp even at the highest setting. We have to point out that this is a quality observed in most Holosun sights, which is commendable at the price that you pay for them.

As mentioned before, we had the opportunity to take these to the range. We strapped them on an AR and tested them out a bit, shooting at different size metal targets at short to medium distances. The Holosun took first points straight up with ease of mounting (QD mount), and the fact that it was instantly at the perfect height for the rifle and also the backup iron sights that we had on it. Sightmark takes a bit more time to attach with the screw-on mount, and it comes at a weird height (at least for us). Luckily, it comes with a spacer that puts it at a better height, where it worked better. Both are simple to zero in, with easily used knobs that come capped for protection. One does need a tool or a screwdriver for clicking on both though. But when ready, both performed more than well on the range. They hold the zero well even with larger calibers (we tried a .308 later as well), and offer fast target acquisition, a great view and a bright image (our range is in a shady forest so that counts a lot). At mid-range, on small targets, the Holosun did quite a lot better due to the sharpness of its dot that is an actual 2 MOA, while the Wolverine's blob can become a slight problem in such situations.

The pair seems completely interchangeable at first sight (talking about characteristics here, not visuals), but when actually taken in hand, looked through and tested, Holosun takes the crown. At this price, both devices are great and will serve the user for a long time given the durability, battery life, and warranty. Both will also perform flawlessly in most tasks, especially those they are meant for. The Wolverine is in all ways a good product, a great one taking the price in consideration, no argument there, but our choice at all times would be the HS402D, as it is slimmer, offers a better view and has an exceptional dot – it is simply better.