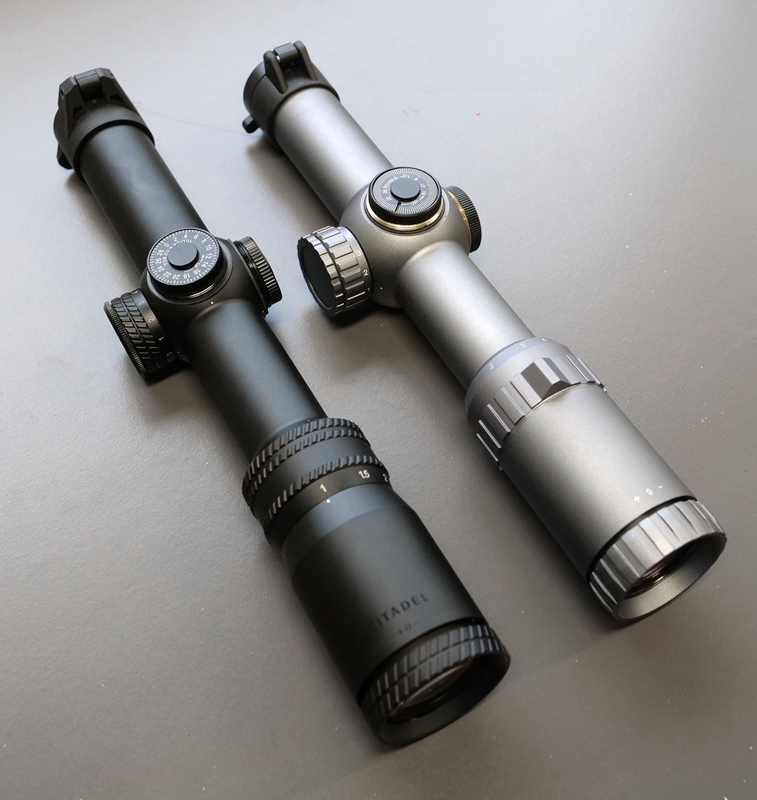 In this comparison, we have 2 wide-angle rifle scopes from two companies which have their headquarters in the United States. The competitors in this review are Sightmark Citadel 1-6x24 SFP and Primary Arms 1-6x24 Gen. 3 SFP.

Sightmark is a fairly new company, which was introduced on Shot Show 2007 in Las Vegas. Since then, the company is constantly introducing new products to the market for the civilian market, but also for law enforcement and military.

Primary Arms is also a very young company, even younger than Sightmark. The company was founded in the year 2008, and also this company is constantly introducing new products, and they have also some unique patents, like the well known ACSS reticle.

By the outside, the similarity between these two products is very big, and only small differences are noticeable. The first of the differences is the design, but also by the design the difference is small. Primary Arms rifle scope is a little bit lighter in weight, but just for 20 grams, what isn't even noticeable if you have both scopes in the hand.

One bigger difference is whatsoever in the length of the products because Primary Arms is for almost 20 millimeters shorter than the Sightmark. But this extra length is noticeable only in the mounting area, what is on one side positive because then the end user has more space for the mounting placement.

Primary Arms 1-6x24 Gen. 3 SFP has an options to choose from 3 different colors, which are matte black, flat dark earth, and like the one we had to test – wolf grey. Sightmark, on the other hand, can be bought only in matte black.

Because both rifle scopes have the same magnification range, they have quite similar specifications also in the internals. A very small advantage of the Sightmark Citadel should be in the field of view because you should see 1.3 meters wider than with the Primary Arms. The eye-relief of the Sightmark is for few millimeters longer, but also the range of the eye-relief is bigger when you change the magnification. This, in my opinion, is a small drawback because you have to change the position of your head when changing magnification. On the Primary Arms the eye-relief changes just for 5 millimeters, what isn't so noticeable when using.

And now the practical test, which we did with 8 friends that don't know any of these brands, so they are completely unbiased and perfect for a test like this.

Here we can see that in all categories except one, the eye-box, Sightmark scored more than Primary Arms. The differences in points were quite big, except in the field of view, the Sightmark scored only 2 points more than its competitor. The only category Primary Arms scored was in the eye-box comparison, and this with a lot of points. Primary Arms didn't score only because the eye-relief is changing on the Sightmark, but you can move your head more and still see the reticle normally.

What I've noticed when I adjusted these rifle scopes, is that the picture gets much worse if you adjust the turrets too much out of the center. So before the test, I made sure that the turrets are adjusted in the middle of the adjustment range to have the best possible picture these two rifle scopes are capable of.

In the center, I can say that both rifle scopes are nice and sharp, and both have a bad edge sharpness. Even that Sightmark got more points, also this rifle scope doesn't shine with the optical quality on the edge. The biggest difference in points was, whatsoever, in the inner reflections, where Primary Arms got only 5 points of 24.

The reticle in the Sightmark is named CR 1, which is a BDC reticle calibrated for a .223 caliber rifle shooting 55-grain FMJ bullets. This reticle was designed for a 100-yard zero, and the holdovers under the center dot should work for shooting up to 600 yards. The subtensions should work on 6x magnification.

Primary Arms, on the other hand, has a reticle named K.I.S.S., which is a very simple reticle for quick target engagement on short to medium distances. This reticle is made for hunting purposes because it has no additional lines under the center which can disturb the user.

Both reticles can be illuminated with red color, and both rifle scopes have 11 intensity setting. The reticles should be daytime bright, but because we were testing these rifle scopes also on the outside, we can definitely say that the illumination isn't strong enough if you look into something that is very bright – white snow for comparison. We noticed this already when we pointed the rifle scope into a white house on a bright sunny day.

And here the biggest advantage of Primary Arms over the Sightmark – you can choose from 7 different reticles. The reticles are in many ways different, some are BDC reticles, but you can choose also from an MOA or MIL based reticles as well.

Under these caps are very identical low-profile turrets with 0.5 MOA click adjustment, what is enough precise for a wide-angle rifle scope. The turrets on both rifle scopes are multi-turn, and both have an insane big elevation and windage adjustment range.

The adjustment range is extremely big, and is much bigger than the companies have listed on their web pages. I think that this is because of their optical characteristics, because if you click too much, the image gets much worse. At the bottom of the clicks (or at the upper side), the image was so blurry, that we couldn't even read a big advertising table which was around 100 meters away. But never mind, I think that nobody will ever need so many clicks on a wide-angle rifle scope.

Like said, the turrets are very identical, but there is a small difference as well, because on the Primary Arms you can turn a plate inside the turret after you zeroed your rifle, so you have the ˝0˝ on the front. On the Sightmark, you can not re-zero the turret without changing the elevation or windage of the rifle scope.

On the left side of both rifle scopes is the illumination control, which is, except for the design, completely identical. It has, like previously mentioned, 11 intensity settings, which are, in my opinion not daytime bright. I didn't like the battery cover as well, because it is very difficult to open it, because the illumination control has no stop at zero or 11, so you can rotate the turret for the whole 360 degrees.

Even if both companies have their Headquarters in the United States, both produce many of their rifle scopes and other products in China, because of the competitive prices. Also these 2 rifle scopes are made in China, as we would expect from rifle scopes in this price range.

They were also both introduced at the beginning of the year 2018, and for both of them, no additional accessories are yet available. The only accessory you get with these rifle scopes are the flip-up covers, which have a really good quality, and they fit perfectly on these rifle scopes.

Both companies give a 10 years long warranty for their products, what is pretty long for such a price. The Sightmark is for 100 EUR more expensive as its competitor Primary Arms, but for this extra money, you get a little bit better optical characteristics.

The two products we tested are both very affordable because of both cost under 500 EUR. But for the small price, you can't expect so good optical clarity and features than on rifle scopes of a higher class.

I have to say that these two rifle scopes are very identical in almost all features. The turrets are almost the same, the illumination control also, and even the magnification ring has the same degree of turn on both products.

I also don't understand why these rifle scopes have such an extreme elevation and windage range. With every click that is out of their specifications, the picture gets worse up to the point that the picture is so bad you can't recognize anymore you are looking at.

But whatsoever, for the price, both rifle scopes have a lot to offer, and both have a solid optical clarity if you are in the range the two companies are advertising. I also like the big range of different reticles of Primary Arms, because you can easily find a reticle that suits your needs.

The long warranty tells us also that these products are made to last, what is really impressive for such a price. In the end, I can only say that the price/performance ratio is very good and that the small price difference Is noticeable only in the optical quality.

Because the parallax is fixed on these rifle scopes, we adjusted them on trees and buildings that were 100 meters away to have the best possible picture without parallax errors.

In this article, we tested optical properties with 8 volunteers, which have no experiences with hunting wide-angle scopes and have no bias towards any of these two brands. To be exact none of the volunteers even knew any of these two brands before the test. Both scopes were mounted in parallel and people observed trees and buildings about 100 meters away. Each person adjusted the diopter setting for himself and from 8 volunteers 3 were women and 5 were men.