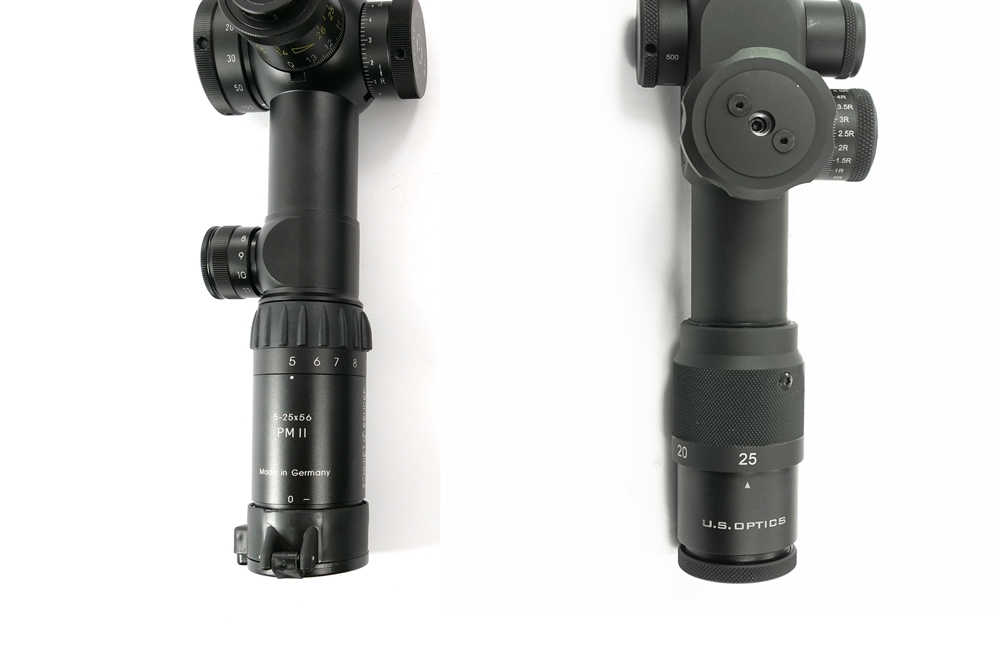 In this comparative review, we are going to compare some of the best rifle scopes from either side of the Pond. The US Optics ER-25 5-25x58 representing the American side and Schmidt & Bender 5-25x56 PM II/LP standing for Europe. Both products are top of the line tactical MIL/MIL long range rifle scopes and are one of the best available on the market.

While Schmidt & Bender is amongst the trendsetters in the field of rifle scopes and as such is well known across the globe, the US Optics has a special appeal here in Europe as it is one of the last remaining rifle scopes manufacturers in the USA and not so widely spread in Europe. For this reason, it has a special i-want-that cool factor. Both scopes are available in a lot of different configurations and are as such, to some extent, close to being custom made. Your personal preferences will shape and mold the finished product.

Both Schmidt & Bender and US Optics scopes are heavy and long, with ER-25 being one of the longest we've tested. The ER-25 rifle scope has a slightly bigger, 58 mm objective lens, thus it's a little bit more powerful and a bit better in low-light situations, since it draws in more light.

Both scopes offer many configurations for wide range of uses, such as the color of armoring and types of reticles. PM II/LP offers three colors of armoring: Black, RAL8000 and Pantone. ER-25 offers nine different colors, which is really fantastic. Both provide 12 types of reticles, so any shooter will find his favorite.

The parallax turret on both models is located on the left side of the rifle scope, and are easily reachable. The design on both is similar, just that the diameter of the turret on the Schmidt & Bender is bigger. The parallax adjustment on the US Optic goes from 75 yards (68 meters) to infinity, and on the Schmidt & Bender from 10 meters to infinity. So theoretically, you could shoot on 10 meters with 25 times magnification.

Schmidt & Bender is the benchmark when optics standards are considered. They have a lot of history behind them and as such have big wishes to fulfill. The S&B-PMII has a stronger tunnel effect than the US Optics ER-25 at low magnification, but at this price range, we expected it to be a lot less significant in both of the two scopes. When we evaluated the field of view we saw that also here the US Optics product had a small advantage over its S&B counterpart.

But when we subjectively tested both products side by side we came to the conclusion that S&B is a bit better in terms of resolution. Similarly applies for the so-called “eye-box” (sensitivity to eye position), where S&B is a bit better and it's more forgiving about your eye position. Don’t be confused though, both of these two scopes are among the best money can buy in terms of optical performance. Differences are small and very hard to notice at all.

By the eye relief we come to a conclusion, that on the smallest magnification by the US Optics the distance to the rifle scope is approximately 9 cm, but on the 25 times magnification only 7.5 centimeters. So you have to be a little bit more careful when shooting some big caliber rifles. On the S&B we didn't recognize any differences in the eye relief when we changed the magnification from the lowest setting to the maximal.

Another major difference when we come to optical characteristics we noticed, that if you turn the turrets to the end of the elevation or windage a part of the picture is cut off (becomes black) in the US Optics ER rifle scope. This is because the inner tube gets pushed to the external tube, so you see a small part of it. This is noticeable only on the smallest magnification, because with bigger magnifications you zoom the edge away. On the Schmidt & Bender, on the other hand, we didn't notice this phenomenon in any setting.

Both models provide reticle illumination that helps you in low light situations. The ER-25 from US Optics has more powerful illumination, ideal even for daylight observations, while the PM II/LP performs less good and we would rate its intensity 6/10. Illumination intensity adjustment as we said is much better with the ER-25 and we would give it a 9/10 score.

The design is also different, since you change the brightness with a push of a button. With gloves, it is much harder, because the three buttons are in a small cavity and quite together. If you want to change the battery, you can't do anything wrong on the S&B, but the design from US Optics is quite different. When you take the turret apart, you have 2 parts plus the battery. After putting everything back together, you have to be careful that you assemble it the correct way, or the illumination won't work.

Personally, I like the solution from S&B more, because it is easier to use in all conditions.

Reticle thickness of both scopes is 4mm/100m at the thinnest section. You can also choose between many types of reticles such as modified Mil-Dot and Mil-hash reticles. The differences among reticles are negligible except the illumination which is much better with US Optics model, since it offers more versatile intensity adjustment possibilities.

The turrets made by S&B are more elongated in their shape, while the ones on US Optics are more flattened. Both are made exceptionally well, as one would expect from a product in this price range. They differ substantially in the options they provide. The PM/II has crispier, firmer clicks, which sound almost perfect but with the ER-25 turret it is easier to know at what click you are, since the space between the clicks is bigger. By the feeling of the clicks, you could compare them with some IOR Tactical turrets.

One thing that really bothers us with the US Optics ER-25 is that it doesn't have a zero stop, neither does it have some sort of turn indication. For these reasons, turret zeroing is so much easier with the S&B PM/II and later also use in the field. Both scopes offer turret options with 0.1 mrad (1cm/100m) and ¼ MOA clicks.

Both S&B and US Optics models don't provide many original accessories which you could purchase, so this is quite a drawback if you take their price into consideration. The main accessory being sunshade, while the problem already starts with the flip-up covers which are usually not available from the factory. Butler Creek covers which come included are just not the right match for such an expensive scopes. We would give it a 2/10 rate, to both of them in this regard. They are however very well made scopes, using top-quality materials. PM II/LP is made in Germany and ER-25 in the USA, which gives them both a big value and consolidates the trust.

S&B provides only 2 years of warranty, which is not such a loss since they have a very good service. Services done after two years aren't expensive and you only pay for the work that has been done and not the material used for repairing. US Optics give a 10 years warranty for their scopes and 2 years for reticle illumination. ER-25 is much more expensive with the price of 3599€ compared to the price of PM II/LP which is 2979€.

Both rifle scopes are amazing pieces of craftsmanship and engineering. The S&B model is a bit stiffer, firmer and made for stronger hands. Especially the magnification adjustment ring requires a lot of power to turn. Maybe this is a sign of good build quality. The US Optics ER-25 is equal when compared with S&B-PMII in terms of optical properties, but Schmidt and Bender is superior when it comes to turret options and possibilities.

Also, one thing that should be mentioned is the very long construction of the ER-25. It is also quite heavy with well more than one kg in weight. The one aspect where it clearly stands out is the superb illumination capabilities, as its illumination is strong enough for daytime use, and weak enough for use with a night vision device.

Last but not least, as mentioned before, because of its scarcity in Europe, the US Optics ER-25 5-25x58 has almost a mythical status at any shooting range, while S&B is considered best tactical scope all in all, by many.

Our team comprises of two enthusiasts who write the articles for hobby and our very helpful unbiased friends who help us make the evaluations, such as the optical characteristics. As we are volunteers/enthusiasts we are not always present in the same numbers. Our ranks can fluctuate from 5 to around 8 people at the time of a test. Other than the two of us who are responsible for writing the articles our friends have almost zero experience in rifle scopes. They have no prejudice and are as such perfect for our objective observations. None-the-less we always try our best to hide all the labels that can give away the products ID. For that reason, e mount the rifle scopes in parallel on a special stand and cover them so the brand names are not visible.

In this article, e tested optical properties with 6 volunteers, which have no experiences with tactical scopes and have no bias towards any of these two brands. To be exact none of the volunteers even knew any of these two brands before the test. Both scopes were mounted in parallel and people observed trees and buildings about 350 meters away. Parallax was fine tunned before the test and each person also adjusted the diopter setting for himself. From 5 volunteers 3 were women and 2 were men.