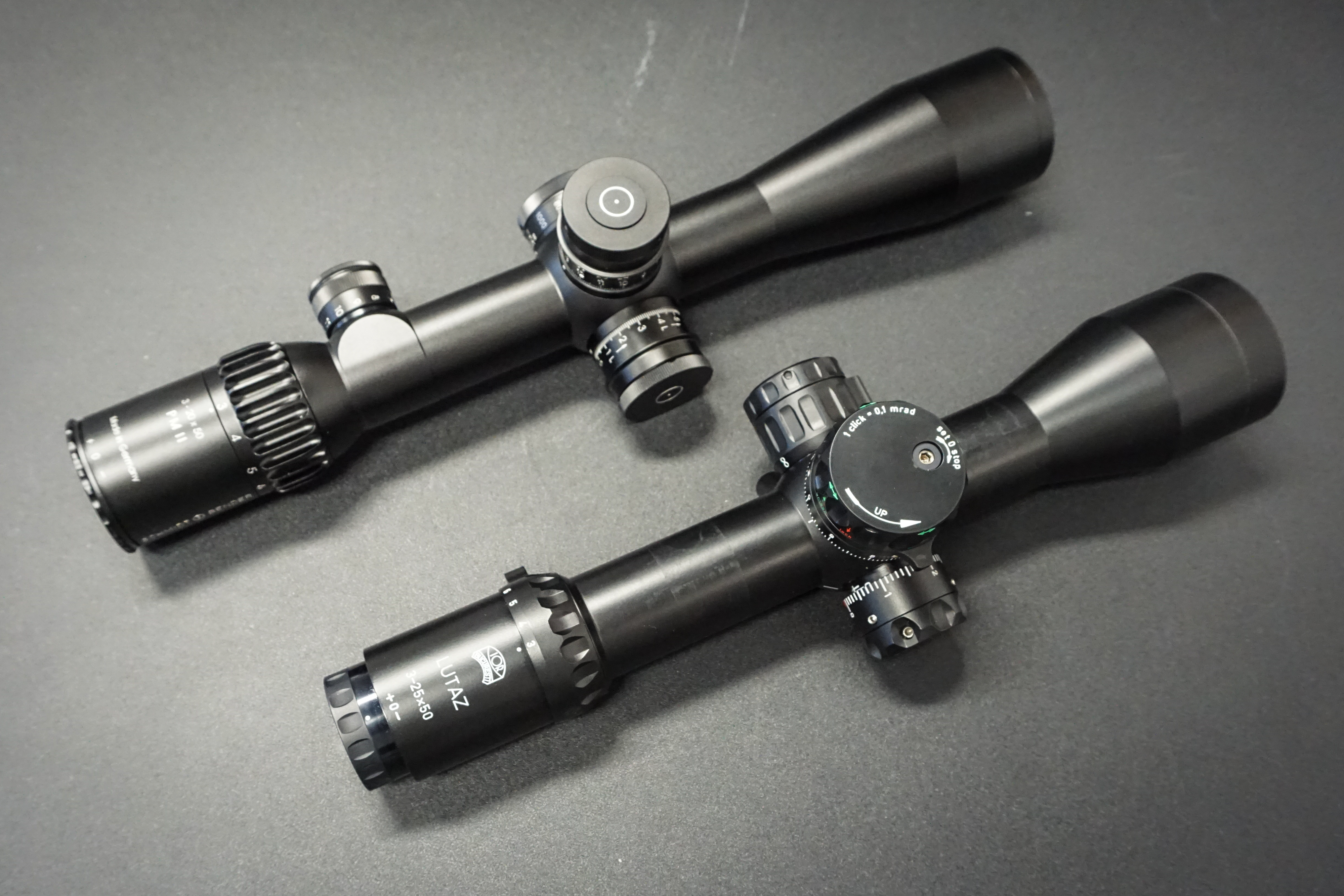 Schmidt and Bender is a German company dedicated to the production of highest quality rifle scopes. Even the models intended for the civilian market look like military equipment. They even share some of the same features. IOR is a Romanian company that also produces rifle scopes both for the military and the civilian market. The following products are promising an interesting test of optical characteristics. Both of these two scopes are MIL/MIL scopes with their reticle positioned in the first focal plane (FFP) with both clicks and reticle subtensions in miliradians. As such both are fully featured tactical scopes, meant for profesionals and/or advanced civilian users. Both of these two companies are also very well know in the tactical shooters community. S&B as producers of probably the best tactical scopes on the market and IOR as their competitor that presented many innovations in tactical scopes. IOR was also always knows as the company that produces scopes with Schott glass, all tactical features and in most cases very tempting price.

The two scopes are by no means similar in size and weight. Schmidt and Bender is a lot lighter compared to IOR but at the same time its substansionally longer. Regarding the turrets, the one on S&B is very Schmidt and Bender like in design. It has an elongated cylindrical shape so typical for the company. IOR on the other hand has bulky, rounded turrets which stand out less but at the same time cover more space. If you are looking for a short scope, then IOR is better in this aspect since it is even shorter than the S&B 3-20x50 PM II Ultra Short, not to speak about the normal version which we have in this test. Schmidt & Bender has however some advantages and that are: nicer looking finish (IOR looks almost like painted in black, while S&B has nicer matte finish), three color options and more convenient 34mm tube tube. IOR features a 35mm tube and thus has a little bit less mounting options. When we look at mounting options for these two scopes, we do however have to acknowledge that IOR offers much more mounting space on its tube, since S&B has the illumination control button on the tube. Both of the scopes have side focus, where IOR goes down with the parallax setting all the way to 10 meters. We also need to mention that all controls on the S&B are really stiff and only changing the magnification can be challenging.

Schmidt and Bender has once again shown that it is crem de la crem when it comes to optical characteristics. The image shown by the scope is crisp, bright and sharp. IOR on the other hand did produce a sharp image, but it had some problems when it came to colour distortion. The featured product had a yellowish tone to the image colour palette. We also noticed that the image became distorted at the edge of the field of view. When it comes to optical properties S&B is a clear winner for us, scoring 24 out of 30 possible points. It received the most points in all the categories but one – that is the edge sharpness, where IOR performed better with winning 3:2. There are two parameters where S&B was the decisive victor. The eye-box and field of view. They are S&B strong points.

We tested optical properties with 6 volunteers, which have no experiences with tactical scopes and have no bias towards any of these two brands. To be exact none of the volunteers even knew any of these two brands before the test. Both scopes were mounted in parallel and people observed trees and buildings about 350 meters away. Parallax was fine tunned before the test and each person also adjusted the diopter setting for himself. From 5 volunteers 3 were women and 2 were men.

There are many different reticles to choose from in S&B scopes and 3-20x50 PM II/LP/MTC/LT is no different. There are 9 reticles in FFP configuration and 2 in SFP configuration. IOR on the other hand only offers 1 reticle at the moment in their 3-25x50 model and as expected that one in FFP configuration. With the variety of different reticles S&B caters for many different tastes of users. It offers thinner reticles than IOR and at the same time also thicker reticles if you wish to have it. IOR reticle in 3-25x50 Lutaz is a nice one and most of the users will like it, however S&B gets more points in this aspect since it offers more options. Both reticles are illuminated, with very different controls. S&B has a standard control turret on the mounting tube, which considerably shortens the mounting length. It is however easy to use and very close to the shooters left hand. IOR has the illumination control located on the parallax turret (side focus) and is digitally controlled with two buttons. Rubber buttons offer the same robustness as do metal turn buttons on the S&B, however they are easy to use and the red dot in IOR is finely tunable for low light use. Both scopes offer only low light illumination and the dot is not bright enough for day time use. Which is completely understandable in the scopes with this magnification range.

The turrets on both scopes are interesting, to say the least. They both share a great feeling to them when one tries to turn them and the clicks are also reasonably audible. The user of S&B should have strong fingers, in order to turn the turrets. But other than that S&B turrets feature a great turn indication, a small dome pops out of the turret and lets you know in which turn you are. IOR has, unfortunately, continued to use markings under the turret dome for turn indication. S&B has a clear advantage here, since it offers a true DT – Double turn turret with very good turn indication. IOR turret has three turns and in the dark it is very hard to know in which turn you are in. Both scopes offer a locking function for the turrets, which is something completely new for the IOR. On S&B this type of turret is know from before, when it was introduced on the 5-25x56 model. S&B also has the MTC (More Tactile Clicks – every 10th click and thus every full mrad/mil has a stronger click), which IOR doesn’t. IOR advantage is however that is has 10 mrad per turn which eases the use, compared to the 14 mrad per turn on the S&B. IOR also offers a marginally greater elevation range. All in all both turrets are closer to each other in terms of quality and ease of use that one would expect.

These rifle scopes are both representatives of European manufacturing. The companies have very different histories and it can be seen as soon as you take a glance of their products. IOR is more rigid and it gives the impression that it does not make compromises in terms of robustness. The finishing on the product is a bit tough, but we believe it can manage to satisfy the hardiest shooters. S&B is almost a work of art in its own right. The finishing touches are close to perfection.

The warranty period is very different regarding both manufacturers. S&B has only a 2 year full warranty, but it is also true that service is provided for 30 years and that S&B is know for excellent (at the same time not expensive) service if you ever need one. IOR on the other hand offers, with its product, offers a jaw-dropping 30 years warranty, which may change the mind of some people in IOR's favor.

None of the scopes is offered with worth mentioning accessories, however IOR does come with a sunshade which you need to buy separately for the S&B.

Schmidt and Bender has done it again. The featured rifle scope is a masterpiece. We have to recommend it over IOR because of its superior image quality and its better eye-box. We think its more user friendly. That does not mean that IOR is a lousy rifle scope, but we believe that some time is still needed for IOR to reach the S&B league. The one thing that may be bothering is the stiffness of the turnable parts on the S&B. IOR does however shine out when you consider its price and size. It is roughly 20% less expensive, which is worth considering and shorter than even the S&B PM II Ultra Short. Not to mention that is offers 25x magnification compared to only 20x on the S&B. Two great scopes, with no major flaws. It is also very interesting how close does the IOR comes to the S&B level of quality with a noticeable lower price.

This featured test is impartial and we always try our best not to prejudice and favor one product over the other. Our team of enthusiasts who tests these products and writes these articles is doing it from dedication, as rifle scopes are our big passion. We also feel a great amount of joy and satisfaction when we know that we have contributed and shared with you our experiences. We try not to be bias and try to be as accurate as possible when interpreting our sightings. We will do our best to described things as they really are.

Our team comprises of two enthusiasts who write the articles for hobby and our very helpful unbiased friends who help us make the evaluations, such as the optical characteristics. As we are volunteers/enthusiasts we are not always present in the same numbers. Our ranks can fluctuate from 5 to around 8 people at the time of a test. Other than the two of us who are responsible for writing the articles our friends have almost zero experience in rifle scopes. They have no prejudice and are as such perfect for our objective observations. None-the-less we always try our best to hide all the labels that can give away the products ID. For that reason we mount the rifle scopes in parallel on a special stand and cover them so the brand names are not visible.

In this article we tested optical properties with 6 volunteers, which have no experiences with tactical scopes and have no bias towards any of these two brands. To be exact none of the volunteers even knew any of these two brands before the test. Both scopes were mounted in parallel and people observed trees and buildings about 350 meters away. Parallax was fine tunned before the test and each person also adjusted the diopter setting for himself. From 5 volunteers 3 were women and 2 were men.