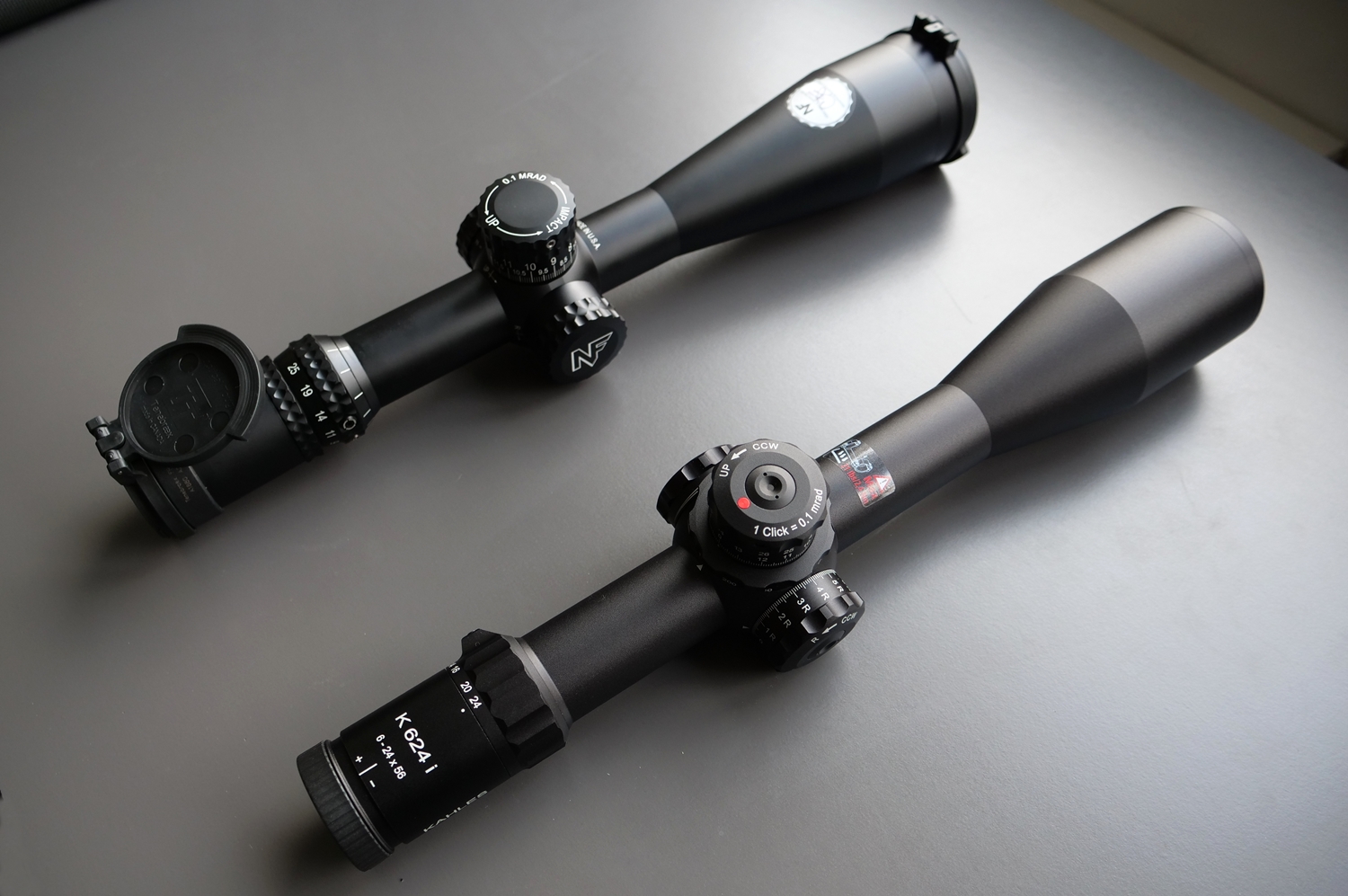 We have done another testing between two high-end tactical rifle scopes, now the US made Nightforce ATACR 5-25x56 F1 and the European Kahles K624i. Both rifle scopes are designed for use under tactical applications in harsh environment, and have to withstand even strong recoiling rifles like the .50 BMG. Both scopes have some unique features like the parallax wheel on the Kahles which is located under the elevation turret, and on the Nightforce the button style illumination with red and green illumination. The reticle in both is in the first focal plane, and the clicks are 0.1 MIL, what makes them true tactical MIL/MIL rifle scopes.

Both scopes are quite big and heavy, the Kahles is 15mm longer than the Nightfoce, but it is also for 116 grams lighter in weight. On rifle scopes like these two, the size and weight mostly doesn't even matter a lot, because they are normally mounted on heavy sniper rifles. The main benefit you get with such big and heavy rifle scopes is the light gathering, what is really a lot with the big 56mm objective lens. Another benefit you get is the big elevation range, that's why are both rifle scopes made in a 34 mm main tube.

The big difference between these two rifle scopes is the ocular, because the Nightforce has a different style of adjusting the diopter setting. You have to adjust your diopter with turning the entire ocular, and then you secure your setting with a counter ring. Since you have done this, then you can change the magnification. Also here is a big difference, because to change the magnification on a Nightforce, you have to turn the entire ocular around. This can be a little bit annoying, because of the lens cover – it is also turning. But Nightforce solved this problem with a high-quality rotatable lens cover from Tenebraex, which is included in the box.

Kahles, on the other hand, has the European style diopter setting ring in front of the ocular, which is non-lockable.

In the optical comparison between Nightforce and Kahles, we have a clear winner. Nightforce has more than twice as many points as Kahles when we compare them optically at all magnifications. Kahles has won only in two comparisons, with the same result - 5 against 3 for Kahles.

When we compare these two rifle scopes in sharpness, we see that almost all points go to the Nightforce. The differences are very small, and you have to focus even on the smallest details to see some difference. But, luckily we had good weather and it was easier to concentrate on these differences.

Because both rifle scopes are true tactical MIL/MIL scopes, the reticle is positioned in the first focal plane. Because of this, they are meant for tactical applications, so you can calculate the distance to the target, make holdovers and wind corrections without clicking the turret.

Both rifle scopes can be ordered with different reticles, 5 each. Both have MIL and MOA style reticles, depending on users needs. So if you order a MIL reticle, also the clicks will be in MIL and vise versa.

The illumination on both is adjustable, on the Kahles you have to rotate the turret, and on the Nightforce you simply push a button on the parallax turret until you have the desired brightness. You have 5 red and 5 green brightness settings. We think that the illumination on the Nightforce is slightly better, because the minimum brightness on the Kahles is stronger and in complete darkness, it is a little bit disturbing. Another major benefit of the Nightforce is in our opinion the green illumination, which is almost perfect for night observation. The green color doesn't disturb so much than the red one, and you can easier focus on your target. Even the reticle is better readable with the green illumination.

The elevation turret on both scopes is very similar, but here the similarity already ends. The windage turret on the Nightforce is capped, so the turret is protected against accidental movement. But, under this protection, a normal tactical turret is hiding. If you don't like this protection and want to have an open style turret, you can simply screw a thread protection ring on the thread on the scope, which is included in the box. This is in our opinion a very good feature, because a lot of shooters don't adjust the windage. Kahles, on the other hand, has harder clicks, so they also won't rotate so easily during transportation.

The elevation turret is like I mentioned very similar, the small difference is, that the Kahles is a double turn style turret and the Nightforce is multi-turn. The one benefit of the Kahles turret is also the turn indicator, because a small red pin pops out on the upper side of the turret, so you have a visual and tangible turn indicator. By turning the turret on the Nightforce, you have to be cautious on the line under the turret, which indicates the turn you are in. In our opinion, not the best solution, because as soon it gets dark you don't see the lines anymore.

As we come to the illumination, we were impressed by the green illumination on the Nightforce. Also the control of the illumination is well designed, but for adjusting different settings of the illumination you have to push the button for every setting different lengths of time. This is a bit confusing at the beginning, but after a while we were all familiar with it. Kahles made a rotating turret for the brightness setting, which is very easy to use, and Kahles goes even further, you can order even the version with the windage turret on the left side and the illumination control on the right side. This is a really nice feature to have, so every shooter can decide what it is the best for him.

The biggest difference between these two scopes is definitely the parallax adjustment, which is on the Nightforce located on the left side of the scope, and on the Kahles under the elevation turret. This is a design, which is comfortable to use for both, left and right-handed shooters.

Another big difference is in the internals, because Nightforce has incredible 10 MIL more of elevation adjustment. Surely 25 MIL is enough on the Kahles for most of the long-range shooting, but without inclination of the mount, the clicks can run out if using a caliber with a big bullet drop.

In this comparison, both scopes play in the premium league, and both have some unique features.  We compared these two because they are the high-end models from both companies, even if the price difference is very big. With 4.752€ the Nightforce is almost 2000€ more expensive than the Kahles with 2890€. They are both in production already a couple of years, and the quality of these products is really on the highest level.

What is really interesting is the very long warranty period on the Nightforce. With 30 years of warranty, Nightforce has to be very confident in their products, especially because such type of rifle scopes are mostly used in a harsh environment and are more easily damaged. Kahles, on the other hand, has 10 years warranty, but they will surely provide good service for their products even past 10 years.

If we compare these two top optics, Nightforce is convincingly better optically than the Kahles, except in the field of view, even if the Nightforce has a smaller magnification. This is because of the tunnel effect, that goes from 5x-7x magnification. But, because the Kahles has a minimal magnification of 6 times, this is not so noticeable in this comparison. However, Kahles has some ergonomically better features, like the parallax adjustment wheel under the turret and the version on which the illumination and windage turrets are swapped.

Both of those two scopes have some pros and cons, and with none of them, anybody can be disappointed. The big question is, if the Nightforce is that much better then the Kahles for how much more in costs. 2000 € is in our opinion very much, and for this price, you get almost two Kahles for one Nightforce. The last thing worth to mention is again the great warranty at Nightforce, which is 30 long years, instead of 10 years by Kahles.

After we are sure that the test can be done without preparations, we ask our volunteers to test the following parameters:

In this article, we tested optical properties with 8 volunteers, which have no experiences with tactical scopes and have no bias towards any of these two brands. To be exact none of the volunteers even knew any of these two brands before the test. Both scopes were mounted in parallel and people observed trees and buildings about 350 meters away. Parallax was fine-*tunned before the test and each person also adjusted the diopter setting for himself. From 8 volunteers 4 were women and 4 were men.