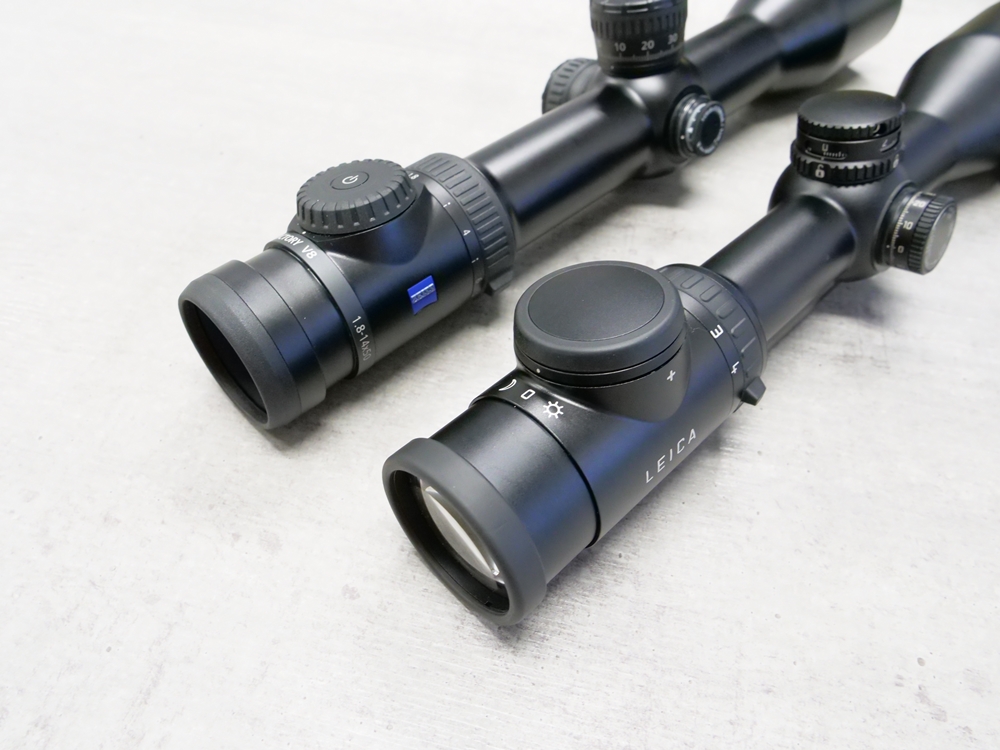 In this side by side comparison, we have two German brands, Leica and Zeiss. They both produce high-end versatile hunting rifle scopes, suitable for hunting on close and even longer distances. Their magnifications are very similar, but Zeiss is a little larger (14x) than Leica (12x). All in all the rifle scopes are similar at first glance, so, therefore, we made a side-by-side comparison, to objectively find out one and others advantages and disadvantages. This review is meant for the hunters, who are deciding between these two versatile hunting rifle scopes in order to find out what best suits their needs.

This data almost speaks for itself.  Both rifle scopes have the same weight and length, the main difference is the tube diameter. Zeiss rifle scope has a larger diameter for 6 mm, but still weighs 20 g less. With the Leica rifle scope, the diopter can be more precisely adjusted, as with Zeiss.

The big difference between the two is the parallax adjustment. Leica rifle scope does not have a parallax adjustment, but Zeiss does. It is a nice feature to have, especially for long-range shooting. Both of them have the option to be mounted on the Zeiss ZM / VM rail.

If we compare the field of view with the minimum magnification at 1.8x, Leica is the winner with an enlarged field of view of 0.6 m at 100 m distance. This is important for driven hunts or simply for shots that need to be executed quickly, because you have to find the animal as fast as possible with the rifle scope. When it comes to minimal eye relief, which means the minimal spacing between the eye, and the rifle scope lens, the V8  has about 5mm of more available space, so shooting at larger angles on long range with magnum calibers is not a problem with this rifle scope. It also should not be a problem with the Zeiss, but it feels more comfortable if more space is available.

Our volunteers, which we picked out by the criteria that most of them have no experience with rifle scopes, gave us their opinion on central sharpness and edge sharpness on two different magnifications, which we thought it would make a difference between results. We picked the 1.8x magnification and the 12x. We tested central sharpness, edge sharpness, inner reflections, the field of view, apparent field of view and the eyebox.

The conclusion of the results is that both of the tested rifle scopes are top of the line and the differences between them are very minimal.

Both reticles are in the second focal plane and have illumination, which can be manually adjusted on both of them. Zeiss rifle scope has a round button, which when pressed activates the illumination and the red dot appears. With turning the button we can adjust the brightness of red dot. Leica has a similar system, but if you want to turn the illumination on, you have two options: One option is you turn it clockwise to turn the „night“ setting on and the other option is turning it counterclockwise to turn the „day“ setting on, which is much brighter.

When it comes to the reticles, Zeiss only has 1 available (60), meanwhile, Leica has 2 (L-4A, L-ballistic). For someone who would use it for long-range shooting, this is a benefit.

Both of the rifle scopes feature a BDC turret, but with major differences between them. Just by looking at them we can see the Zeiss turret is bigger, bulkier and made of plastic. Leica`s turret is smaller and looks more like it is meant for hunting. Zeiss made a ballistic turret which locks itself when released. This is a great feature because it cannot be turned by accident. When you want to turn the turret, you push it up first, then turn and release it to the position you like. It automatically locks up. Leica rifle scope has a locking mechanism made with a ring at the bottom of the turret which you have to turn to lock the scope. The solution is not as good as the one on Zeiss, because you can incidentally turn the ballistic turret when locking it up, especially with gloves on.

Another thing is the predefined BDC rings, which are available for both rifle scopes, but on the Zeiss, there are 9 and on the Leica 12, which gives it a better flexibility. The windage and elevation range is different, because of the simple fact that Zeiss has a 36 mm tube diameter instead of the Leica`s 30 mm. When it comes to parallax adjustment, Zeiss has one and Leica does not. This is a neat little feature especially for longer shots, so the parallax can be set right.

We want to thank the Optics-Trade online shop for providing and enabling us to test these 10 great rifle scopes. Whatsoever, this review is not sponsored and it’s completely unbiased. This comparison was made simply because of our own interest in the optics and provides an objective opinion of tested rifle scopes.