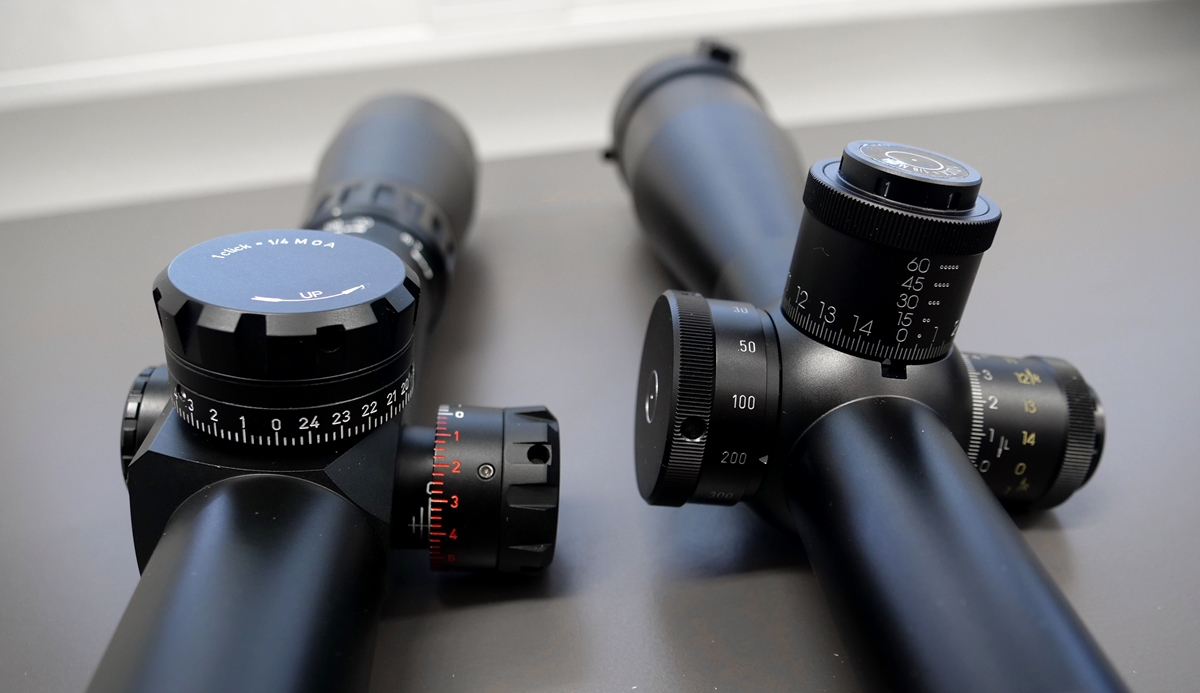 After a long time, we had again two rifle scopes on the test, which are designed for precision long range shooting, F-Class, and benchrest. In this test, we have two well known European companies, which both produce high-quality rifle scopes for the military and civilian market.

Schmidt and Bender is very known because of their famous PM2 or Police Marksman 2 series, and also this scope is built on the same principle like their tactical scopes. IOR, on the other side, is also made as their tactical rifle scopes, and is very similar to their best selling model, the IOR Tactical 4-28x50/IL FFP.

In both rifle scopes is the reticle set in the second focal plane, and both have clicks in MOA. The Schmidt & Bender in 1/8 MOA and the IOR in ¼ MOA.

Both rifle scopes are very heavy for F-class or benchrest rifle scopes, what can be a small disadvantage if you have some weight limitations, like in the F/TR category for example. Whatsoever, the IOR is 260 grams heavier than the Schmidt & Bender, which is not little.

They are both very long, measuring over 400 millimeters. In our opinion this doesn't matter, because these rifle scopes are mostly mounted on competition rifles, so the length of the scope does not play a role.

What's very special of the OIR rifle scope is definitely the big main tube diameter of 40mm. This was a brave step from IOR when they released their 4-28x50 model, since there were only few scope mount manufacturers which produced a mount for this scope diameter. In nowadays all major mount manufacturers produce such rings or monoblock mounts, so the buyer doesn't have to be afraid for not getting the right mount. Whatsoever, this is a fairly new design of a rifle scope, and IOR claims that they get better image quality, more light transmission and of course – more elevation. Like mentioned, also this rifle scope has a main tube diameter of 40mm, and because of this, the IOR has 25 MOA more elevation like his competitor, the Schmidt & Bender PM2.

In the diopter setting both rifle scopes are quite similar, just that IOR has a little bit more of adjustment range, which goes till -3 and not to -2 like on the Schmidt & Bender. Also in the parallax adjustment range scores the IOR, but the small difference isn't even noticeable. Also, with such a big magnification rifle scope the user will almost never need to focus on a target that is only 7 meters away.

Both rifle scopes are available only in black. 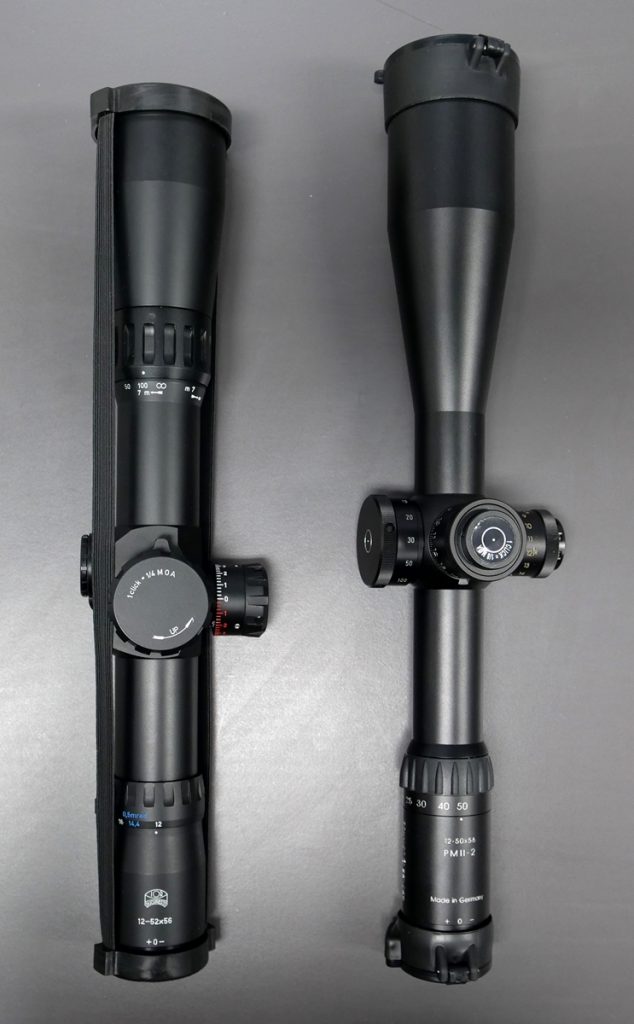 Because the magnifications are almost equal, also the field of view is almost the same, with just minimal differences. What we noticed when testing the scopes, is the very small eye relief on both scopes on maximum magnification, and on the Schmidt & Bender also on the minimal magnification. With only 70mm from the eye to the scope, we think this is very little, and when shooting a bigger caliber, this can be very dangerous.

Finally, we come to the optical characteristics. I can definitely say that the Schmidt & Bender PM2 scored over the IOR Terminator in all aspects, and that the differences are really huge. We expected more equal results, and were really disappointed with the image quality in the IOR scope.

The image in the IOR isn't as sharp as the image in the Schmidt & Bender, not in the center and not on the edges. The reflections in the IOR are also very strong, especially if you are a little bit further away from the maximum eye-relief, the picture gets really bluish. Not to mention the eye-box – it is one of the weakest points of the IOR, because on maximum magnification you have to be really steady to stay in the picture of the scope. 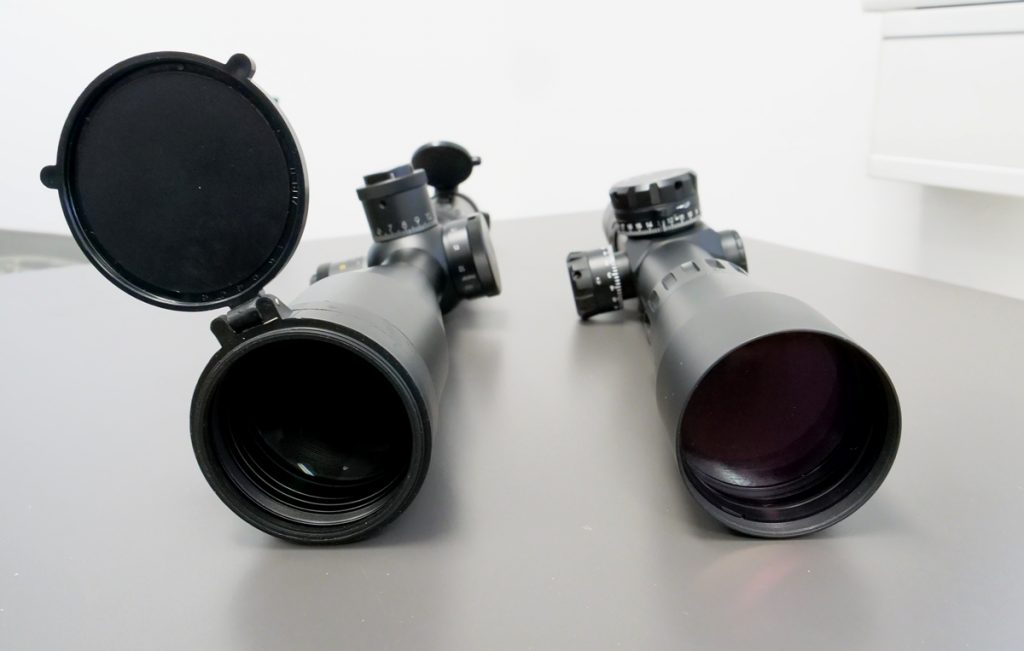 The reticle in these rifle scopes is set in the second focal plane, which has its benefits when shooting on a target with a known distance, and where big magnifications are needed. This is because the reticle doesn't get thicker when magnifying, and that's why is the reticle very thin at maximum magnifications. As we see here, there is a small difference in the thickness, where Schmidt & Bender scores over the IOR with a thinner reticle. This is in our opinion an important feature, since a thicker reticle covers more of the target, and consequently it is more difficult to do corrections on the target.

Schmidt & Bender, on the other hand, has a modified mil-hash reticle, which is a MIL based reticle, but only at a magnification of 25 times. Also this reticle can be used for distance calculations, but here is a bigger probability to make some mistakes, because the magnification ring doesn't click in. Therefore, the user can make the calculation on bigger or smaller magnification than 25 times, and that's why the small mistakes can occur.

A big advantage of the Schmidt & Bender is in the reticle selection, where the buyer can choose between 6 reticle options, compared to only 1 on the IOR.

In the turrets comparison, there is a big difference. First of all, both have exposed tactical turrets, which are multi-turn, but on the IOR the clicks are in ¼ MOA, on the Schmidt & Bender, on the other hand, the clicks are in 1/8 MOA. This is a major difference when shooting small groups at longer distances, because with the Schmidt & Bender you can make much finer adjustments compared to IOR.

The turrets on the Schmidt & Bender are clockwise adjustable, compared to the turrets on the IOR, which are counter-clockwise. They both feature a zero stop function, and additionally on the IOR you have a second zero stop ring, if you want to change the rifle scope to another rifle, because of a zero change when adding a silencer, or just change ammunition to let's say subsonic.

The total travel of the elevation turret on the Schmidt & Bender is 75 MOA or 22 MIL, compared to 100 MOA or 29.6 MIL on the IOR. This is a big difference in the elevation range, what makes the IOR more preferable for extreme long range shooting, where a big bullet drop can occur. Also in the windage adjustment range is a big difference, where IOR has almost the double of adjustment range against Schmidt & Bender.

From the outside, we have to say that we really like the turrets on this particular Schmidt & Bender. They have the right size, they feel and they sound just great. This are also the best turrets we had from Schmidt & Bender now for a long time.

One disadvantage we noticed on the IOR is the easy to rotate elevation turret. Even if the clicks feel good and are audible, the turret is very easy to rotate. These might not be important on an F-class scope, but I think it is worth to mention. 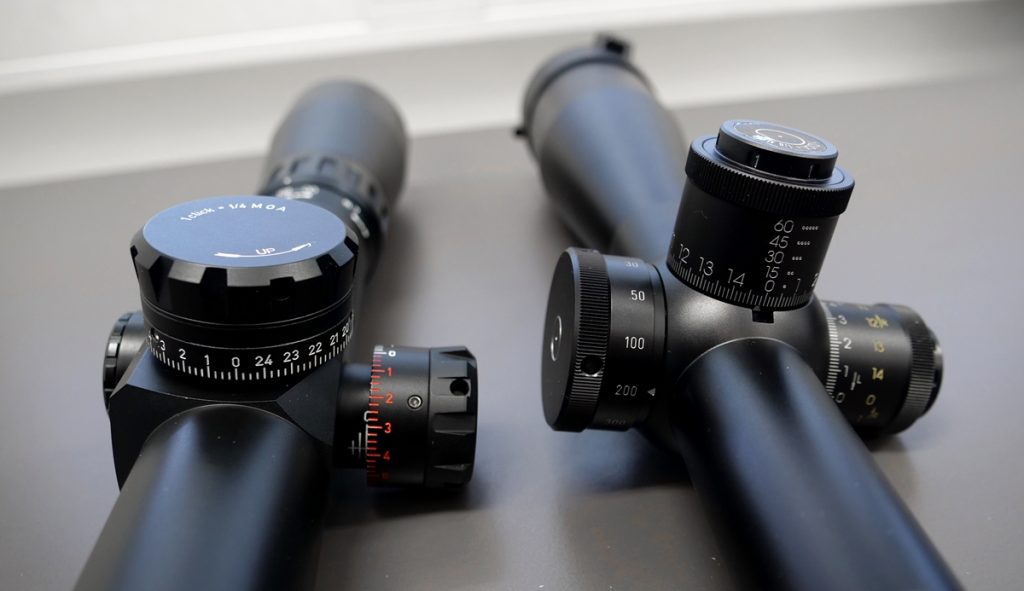 Both rifle scopes are on the market already for a long time, 7 if I am correct. Schmidt & Bender makes their products entirely in Wetzlar Germany, IOR on the other hand, is located in Romania, in their capital city Bucharest. Also IOR makes the products in their own facility, except the lenses. They are produced by the well-known company SCHOTT AG in Germany, like some other optics manufacturers like Zeiss and so one.

The IOR comes with a sunshade, a manual and with protective bikini style covers. Schmidt & Bender, on the other hand, does not come with a sunshade, but with Butler Crees flip up covers and also a manual.

A very big difference between these two rifle scopes is in the warranty period, since IOR gives 30 years long warranty compared to only 2 years of the Schmidt & Bender. Because of this feature, IOR has to be very confident in their products. Although Schmidt & Bender has only 2 years long warranty, they provide great and not expensive service even for 30 years after the release date of the product.

These rifle scopes are in the upper price range of competition rifle scopes, and they cost over 2500 euros, but under 3000. Schmidt & Bender 12-50x56 PM2 is slightly more expensive than its competitor, the IOR Tactical 12-52x56/IL Terminator.

Both rifle scopes have their pros and cons, but both are worth the money. The IOR scores in our opinion in the internals, like the much bigger elevation and windage range, what is needed for extreme long range competitions. For such competitions, also the 1/8 MOA clicks are not needed. What we also like on the IOR is the robustness of the scope, which is really designed for strong recoiling calibers like the .408 Cheytac, .416 Barrett, .50 BMG and so on. The main disadvantage of this rifle scopes is definitely the optical clarity, where we really were disappointed. If IOR would offer different reticles would also be a big benefit, because many shooters don't like the SHx (MP-8 Extreme) reticle because of the point I the middle, that is covering a lot of the target, especially on smaller magnifications.

Schmidt & Bender is, as already known, one of the best rifle scopes on the market if we compare them optically, and it is really difficult to defeat it. The whole build quality is also on the highest level we would expect, except the small eye relief we mentioned before. This is in our opinion also the biggest disadvantage of the scope, but it is a true benchrest of F-class scope, where such strong recoiling calibers are not I use.

We accurately fine tune the parallax on all the testing products for observing trees and buildings at 280 m and each person sets the diopter for their specific needs.

In this article, we tested optical properties with 6 volunteers, which have no experiences with tactical scopes and have no bias towards any of these two brands. To be exact none of the volunteers even knew any of these two brands before the test. Both scopes were mounted in parallel and people observed trees and buildings about 280 meters away. Parallax was fine-tuned before the test and each person also adjusted the diopter setting for himself. From 6 volunteers 2 were women and 4 were men.