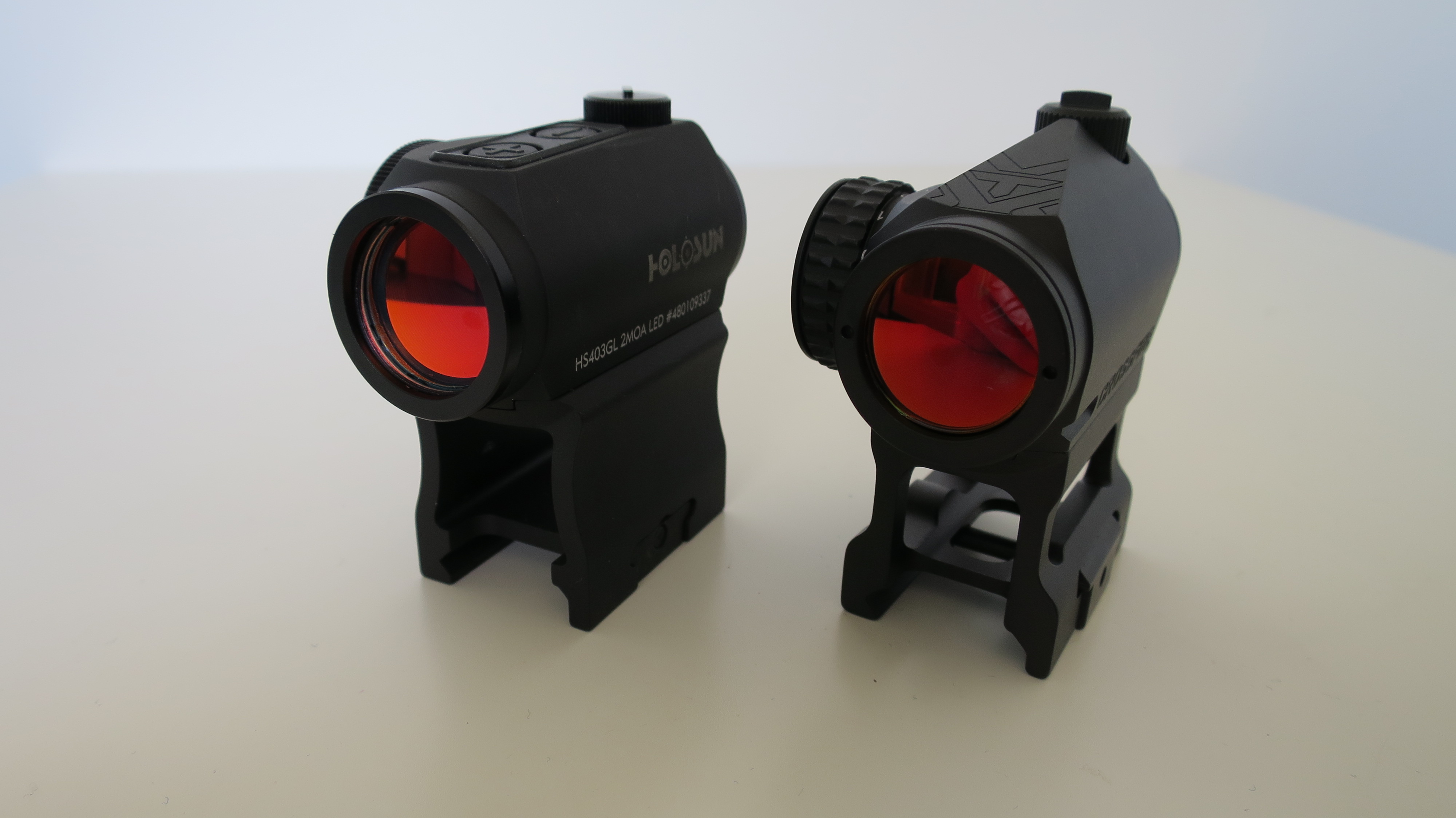 We continue in our quest to discover affordable yet well-made red-dots, so, this time, we are strolling deeper into the pool of low-priced sights. To stay in the same field, we will once again compare a Holosun and a Vortex, but we will downgrade a bit, to see how cheap these two brands can get and still maintain their quality and reliability. In the previous part, we looked at the Holosun HS503GU and Vortex Sparc AR, that move for about 250-300€, so we move on to Vortex Crossfire Red Dot and Holosun HS403GL that are sold for as little as 150-210€. We were curious to see how the price drops impacts mainly image quality, accuracy and reliability.

Not only did we move to the cheaper side of the pool, but also the very compact part of it. Both devices are small and very light, especially for a tubular sight. In fact, amongst those, taking out the single-lens sights, they are definitely amongst the smallest on the market, especially the HS403GL. While the Holosun is, in itself, slightly lighter, if we add the weight of the raised mount, they are about the same as the Vortex come with a lightweight, skeletonized mount. Speaking of mounts, they come included with the sights, a co-witness 30mm height as well as a low mount, in both cases it is a standard, screw-on Picatinny mounting system.

Holosun comes in a neat, plastic box with a custom foam inlay. In it, besides the mount and the two mentioned raisers, is also an Allen key, the battery, and rubber lens covers. The Vortex arrived in a cardboard box, but a sturdy and nicely made one, with all the above-mentioned items attached as well. Checking the interior, it is obvious that both sights are quality made. The finish is good looking and well done, and both products look attractive and professional.

So, continuing the comparison of the two low priced red dots, it might be a good place to point out that we are, at the same time, also comparing them with their larger and more expensive brothers from their respective brands. In the previous part we noticed that besides the fact that they are a bit smaller and lighter, they are still well made and don’t deviate much, but when we start checking the general properties, the differences start to show.

The warranty stays the same, it makes sense, of course, that a producer would offer the same policy for all their products. Therefore, as always, Holosun offers a 3-year warranty on electronics and 5 years on the lenses. Vortex, however, keeps offering their VIP unlimited lifetime warranty, which effectively means that should anything ever go wrong, they will fix it for you one way or another, and that, in our eyes, is simply awesome.

The two sights are both powered by a CR2032 battery, and have about the same life length (Holosun lists theirs at 50.000 hours at the lowest setting, while Vortex list theirs at 7000 hours at medium settings. Considering the power options, it should come down to about the same battery life in the same setting).

Resistance, resilience, and temperature work span are similar in both, and are quite satisfying, even for the professional users. The housing on both looks rigid and sturdy, and we have no doubt that it can take a punch.

When it comes to special features and properties, it is where things get different, in many ways. First off, what you read in the previous blog of the two pricey bigger brothers of these sights, goes out the window immediately, and that is the main thing. The Crossfire and the HS403GL are not only slimmed down in weight and size, but also features. The Crossfire comes without any special features worth mentioning that are not a part of most other sights. The HS403GL does have one piece of candy though – the shake awake function, that will turn on the device on the last intensity setting whenever you ‘shake’ the rifle (by grabbing it, picking it up and so on).

Considering these are two small, compact devices, the field of view on the 24mm lenses is actually impressive, mostly due to the shortness of the tube, which will also let through more than enough light to be usable in any weather. The lenses themselves, on both the HS403GL and the Crossfire, are good, even more than so. The image is sharp and clear, and there is only the slightest distortion on the edges. The problem is only that Vortex does have some light dispersion at higher brightness settings of the dot, which shows in a thin red rim that forms on the edge of the lens.

The click value on the Holosun is extra fine for a red-dot at 0.5 MOA per click, allowing for the tiniest adjustment against the still more than usable 1 MOA clicks on the Vortex. The adjustment range though, evens the scale at 50 MOA for Holosun and 100 MOA for the Vortex. That is for both windage and elevation. This makes both sights very easy to zero in for any type of use.

Both devices have a good number of brightness adjustment levels, with 12 for Holosun and 11 for Vortex. The difference here is that the first few levels on the HS403GL are NV friendly, while the Crossfire sadly isn’t NV compatible, not that this matters to most civilian users.

The dot is the same, perfect-for-most-applications size on both at 2 MOA. As we already figured out in the previous blog posts featuring Holosun products, their dot is exceptional. Now we are not saying that the dot on the Vortex is bad, far from it! The dot is fine and sharp, and only blobs and smudges a little on the highest settings. The problem is also that, as stated above, on those settings (9 and up), you also get a red rim on the edge of the lens. This is probably a bit due to the lower quality of the lens and not a LED problem. The thing is that Holosun really has an ultra-fine and sharp dot that one just needs to appreciate.

This time, we used a VZ58 chambered in 7,62x39, just to see if the cheaper models can handle a bit of extra recoil. We used a Picatinny rail adapter on the dust cover of the rifle to mount them. Both come with a simple and sturdy Picatinny mount that needs to be screwed on the rail, but once on there, it holds well.

We also tried them on a .22lr rifle, as a cheap sight is perfect on a cheap rifle to keep you within a budget, but we believe that staying on a budget doesn’t mean giving up on good quality, and these two sights proved that while we did some ‘plinking’ on the range.

Shooting with these sights was simple, easy and fun. They perform flawlessly and have no problem surviving the hard kick of the rifle. They hold the dot zeroed even with lots of shooting and a bit of abuse and will even withstand some knocks and drops.

Zeroing itself is easy with the little covered knobs, the principle being the same on both devices. You can do it by hand, but it goes much easier with the help of a tool, and they both have smartly designed covers that can be used as an adjustment tool as well.

It was rather cloudy on the range so the light was a bit dim, but the image is still clear and bright, a tad more with the HS403GL than the Crossfire though. The parallax is virtually non-existent, the only problem being, once again, the very edge of the lens on the Crossfire. The 2 MOA dots made being accurate present no problem at all. Even at longer ranges, the HS403GL will pose no problem, and the same goes for the Crossfire, as long as the light conditions don’t force you to put the brightness on high, in which case, the dot will get quite larger than 2 MOA indeed.

The sights are good. Really good considering the price. Holosun HS403GL has just those few little things and advantages that make it better and more recommendable, but we would not throw the Vortex Crossfire away in any case.

There is that just one little thing that we need to point out - if you are not on such a strict budget, throw in the extra hundred bucks and go with the better, newer models from last comparison (Holosun HS503 and Vortex Sparc AR), as they are well worth the slight price increase.