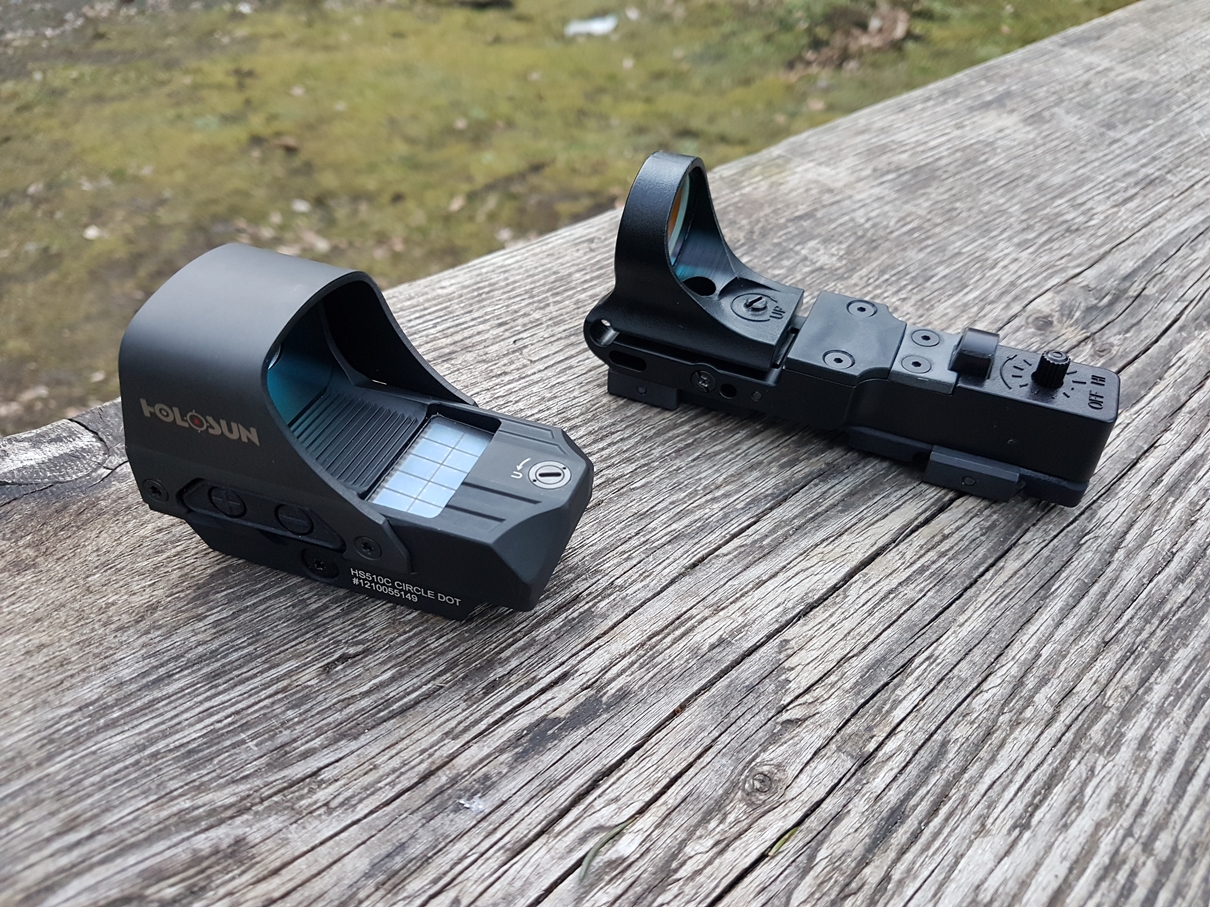 With the rise in the popularity of the PCC shooting, both with amateurs as well as professionally after it became recognized as an IPSC division, a dedicated red-dot sight became a must-have in those waters. Of course, there is an abundance of possibilities here. Most shooters go for a large window, unobstructed field of view, and a rather large dot (due to the nature of the courses). Therefore, it makes sense that the two devices we received are amongst the most popular. We are talking about the Holosun HS510C and the C-More Railway, and we will be taking a close look at them. And yes, of course, we will mount them on a firearm and take them to the range.

The two devices are really impossible to fairly compare size-wise as even the shape is entirely different. Each come with their specific pros and cons due to the shape and size of each device.

The Railway, for one, is much slimmer, narrower, but longer. Meanwhile, the HS510C is bulkier (and heavier), but it is shorter and has a larger window. It also looks better (just an opinion, of course).

The Railway sits nicely on the rail and seems to blend with the length of the rifle. It is non-obstructive both physically as well as in terms of the field of view, also due to the thin rim around the lens. The Holosun though perches like a bulb on the rifle, but the large lens offers great width of view through the window and due to it being rather compact, it fits nicely also on the shortest weapons and even on tiny rail sections.

*There are several options with different heights and mounting types.

The Railway seems a bit fragile, as mentioned, with its exposed lens and thin protective rim, but then again, it is a sports optics and not a tactical, military device. It is made to be reliable but not meant to take punishment. Of course, it depends if one chooses the aluminum or plastic body, but neither will withstand much abuse (such as in combat situations). The battery is one not often found in red dots anymore, and the battery life is not the best compared to other modern devices.

Secondly, the HS510 is quite a bit heavier but seems sturdy. The lens is well protected, the device compact and simple, and it comes with a QD rail mounting system. The battery is a classical CR2032 with an impressive working time.

The lens on the Railway is good, really good. The view is clear and crisp. But so is the one on the Holosun, which usually has good, clear lenses in their devices. Both are lightly tinted for good clarity, lighting, but also contrast.

Holosun has 12 brightness settings, 2 of which are NV compatible, operated with two buttons. The C-More is operated via a tiny turret (more on that later), with 14 settings – off, 2 NV settings, and 9 normal brightness levels.

The adjustment value of the Holosun is rather standard, while on the Railway it is just immense, enabling the user to really tune out the sight to his firearm (even achieving different co-witness levels without any raisers or adapters). The only problem is that even after searching through the manufacturer's web page, a bunch of internet pages, the instructions booklet and much more, it is not possible to actually find public information of the click adjustment value for the Railway, which is odd.

The C-more comes in many variants, including the body material, mounting system and so on, but one of the nicest features is the variety of dots, that go from 2 MOA all the way to 16 MOA. And the best part is that one can change the dot size in his device by simply swapping out the diode. The dot itself is quite sharp and nicely defined, and on the higher brightness settings well visible, but it gets a bit smudgy.

The HS510C has a 2MOA dot, with the possibility of a 65MOA circle (one can have either one or the other or both at the same time). We keep saying that in most blogs but yes, the dots on Holosun sights are simply incredible for the prices of their devices. It is sharp, and actual dot and not a smear or a line. Simply great.

We took them on the range, of course, and since this is the purpose, we mounted them on a 9x19 firearm first and gave it a go. In this case, we used a conversion kit for a Beretta APX pistol to mimic a PCC. But just for the sake of it, we also tried them both on a VZ58 (AK caliber), ad lastly on a 12-gauge shotgun. Just to see how it works.

Firstly, mounting. The HS510 has a great QD mounting system. Now it is not meant as that type of sight (in this case, one needs to go for an HS503 or HS403), but it does not have the possibility of a 30/34mm raiser. Meanwhile, the Railway has a bit unpractical system of fixing it onto the rail. It is adaptable so you can place it at exactly the spot you want, but it takes time to mount. Once again, not a problem for sports optics as one will not be doing this very often. When preparing the dots, we had to put in the batteries. Both need a tool to change the battery, so it takes a while. Not a problem really, as the Railway is meant as a competition device anyway, so there is no pressure, and in the HS510 it is not something that is done a lot really with the claimed battery life of up to 50 thousand hours. Both need a tool to adjust the dot.

Once mounted, both devices performed well though, and withstood the recoil of both AK and 12-gauge rounds without a problem or losing zero.  They both offer great visibility and adjustability and good contract with easy target acquisition. The HS510C is only a bit obstructive as it has a slightly bulky rim, while the C-More offers a great field of view with little obstruction. The brightness adjustment knob on it though is awkward as hell. Firstly, one needs to take his hand clean of the gun to use it, and even place his had in the way of his view through the lens. Also, the turret is small and slippery, so it would be a problem using with a gloved hand.

It is rather hard to honestly compare as these are two very different devices. Both are good and quality made, and both have some ups and downs compared to the other. But since these are two devices that are very popular with PCC shooters, we had to try and compare them anyway. Honestly, we were skeptical about the Holosun due to the size, and the Railway due to looking a bit fragile. We tried to understand both in the context of a competition optic and separately as a device used in combat, defense or tactical scenarios. That being said, we would conclude with this - if we were looking for a red-dot sight for a sporty, competition PCC rifle or other SMG type system, we would go with the Railway. For any other firearm (shotgun, large-caliber rifle), and for any other application (even a tactical/combat SMG), we would go for the HS510 anytime.

This featured test is impartial and we always try our best not to prejudice and favor one product over the other. Our team of enthusiasts who tests these products and writes these articles is doing it from dedication, as rifle scopes are our big passion. We also feel a great amount of joy and satisfaction when we know that we have contributed and shared with you our experiences. We try not to be biassed and try to be as accurate as possible when interpreting our sightings. We will do our best to described things as they really are.