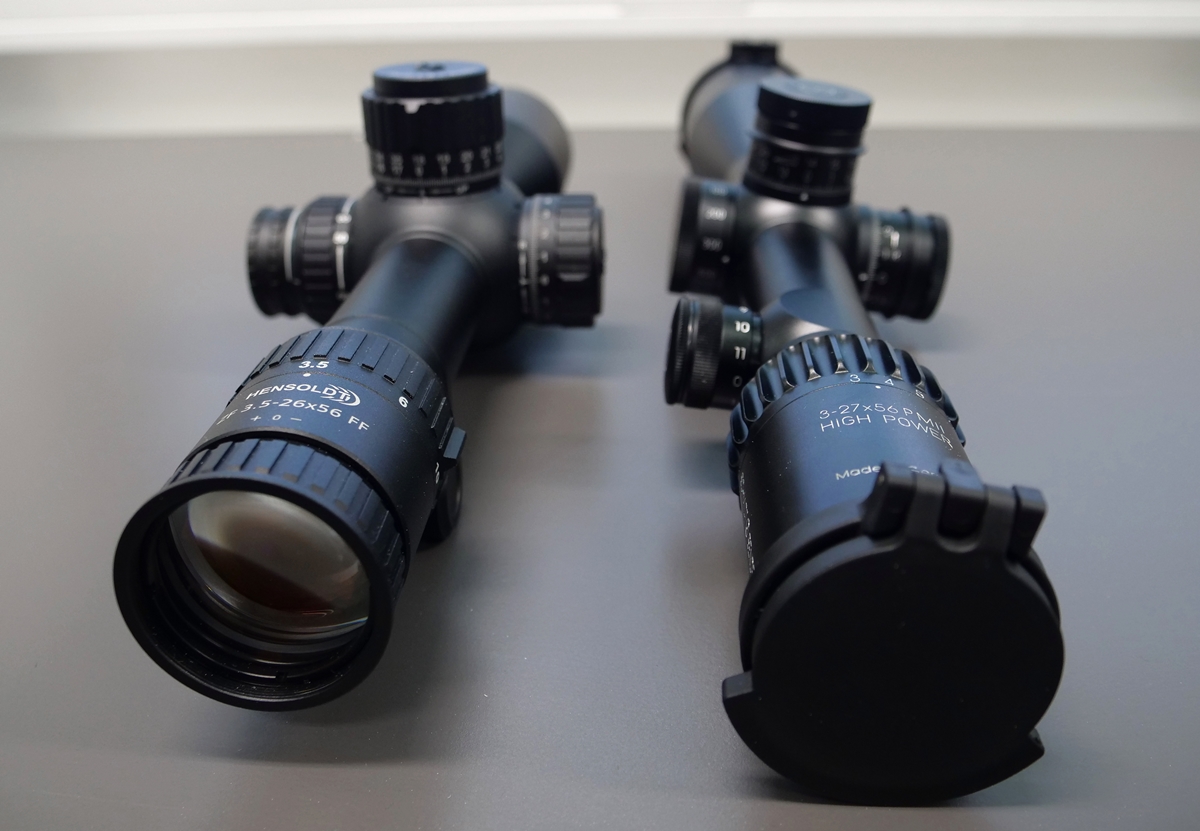 Both rifle scope manufacturers are based in Germany, Wetzlar if we are correct. Schmidt & Bender has their own facility where they produce the entire rifle scopes and all the components by themselves. Hensoldt, on the other hand, are also produced entirely in Wetzlar, but in the facility of Zeiss.

Both rifle scopes are on the heavier side of all currently known rifle scopes, and Hensoldt is right behind the Vortex Razor HD 4.5-27×56. With its 1300 grams it is for 75 grams lighter than the Vortex, but for 172 grams heavier than its competitor in this comparison, the Schmidt & Bender 3-27×56.

Where the Hensoldt scores it is definitely the length. With its short design, this rifle scope can easily be used with thermal or night vision front attachments, and the user doesn’t need to stretch his arm so far ahead of the rifle, to adjusting the front attached device.

What is unusual on the Hensoldt is the big main tube diameter. With the 36mm tube, there were not many manufacturers at the beginning that produced a mounth for this scope. Fortunately, this isn’t the case nowadays anymore, since all major scope mount manufacturers produce tactical mono-block mounts or even single rings in this dimension for almost all rifle bases. However, the big main tube diameter has many advantages, but more of this later.

Schmidt & Bender on the other side, has the standard main tube dimension in tactical rifle scopes, 34 millimeters. 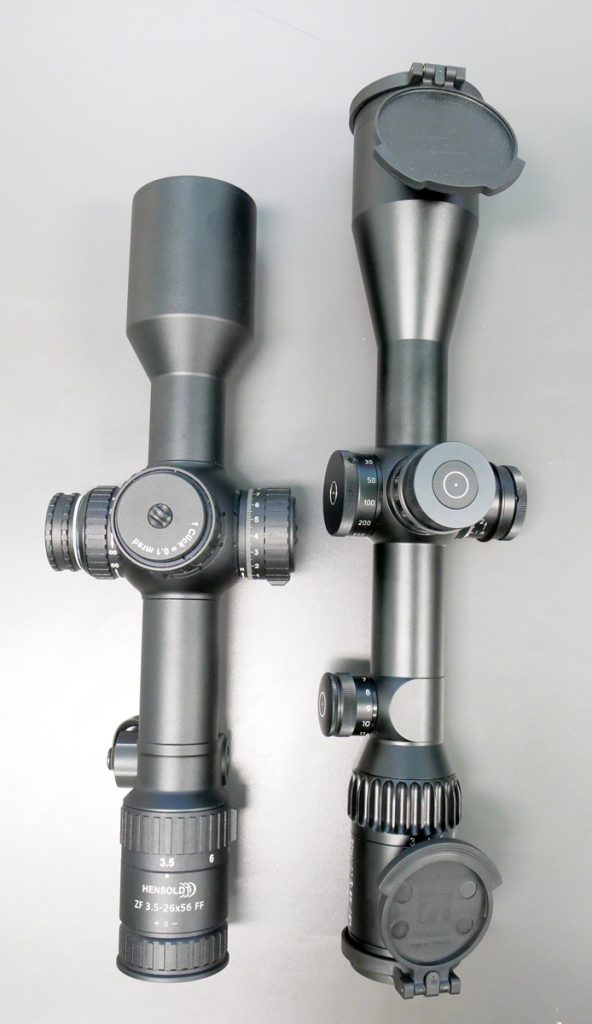 When we compare these two rifle scopes, we see that they have a very equal magnification range. Because of the 0.5x less minimal magnification, and 1x more maximum magnification, the zoom factor on the Schmidt & Bender is 9 times, compared to 7.4 times on the Hensoldt.

What we see in this optical comparison, is that the price matters also in the highest premium class of rifle scopes. We know Schmidt & Bender from our earlier tests, that they are all optically on the highest podium against other brand scopes, but now we can definitely say that Hensoldt has taken the crown away from Schmidt & Bender.

Although both rifle scopes have best glass inside the brands can produce, the Hensoldt is in all categories we tested better than the Schmidt & Bender, except in the field of view. In the central sharpness, we see that on the smaller magnifications the differences are quite big, because the majority of testers voted for the Hensoldt. Just on the biggest magnification we tested, the 26x, the result was a tie.

The same was with the edge sharpness, where also the majority voted for the Hensoldt. Here the Schmidt & Bender had almost no chance, because it got just 2 points, and the Hensoldt 22.

When we looked at a white target with sharp edges, we noticed some reflections with the Schmidt & Bender, but none of them with the Hensoldt. These reflections were like a blue shine, which distort the whole picture. Especially if you need to see some details this can be really annoying.

The last we tested was the eye-box on the smallest and on the biggest magnification of the Hensoldt. Also here did Hensoldt get the most points, if we are accurate, 12 against 4.

Because of the optical properties of these two rifle scopes, 6 testers would rather buy an Hensoldt, and 2 the Schmidt & Bender. 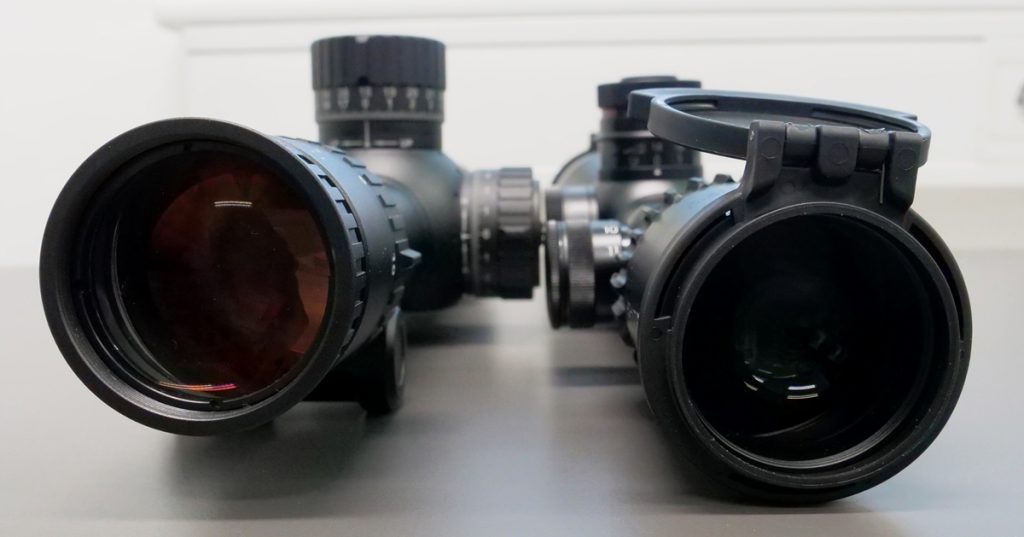 Both tested rifle scopes are tactical rifle scopes, and that’s why they both have a tactical reticle which is positioned in the first focal plane. This is very important for holdovers, wind corrections, but also distance calculations and quick second shot engagement.

The Hensoldt has a modified Mil-Hash reticle, and the Schmidt & Bender a P4L – Fine reticle. They are both MIL-based, what means, the lines in the reticle have a spacing of 5 cm or 10 cm on 100 meters.

Both reticles are illuminated with red color, which is usable only in low light situations. Unfortionally we did not find the exact reticle thickness of the Hensoldt, but the minimal thickness of the P4L – Fine is 0.35 MIL.

The reticles are very thin at the lowest magnification setting, what makes them very difficult to use for holdovers or other fine corrections. To see the small lines on these rifle scopes, we had to go at least on the magnification of 6 times, or even 8 times for a more comfortable use. However, this is quite normal in our opinion, since mostly this rifle scopes are used on sniper rifles, and the small magnifications are for observations, and the bigger magnifications for recognition or target engagement.

Schmidt & Bender has 5 reticle options available to choose from, so every user can find a suitable reticle for its needs. That is not the case at Hensoldt since they offer only one reticle option for the civilian market. For the military, Hensoldt produces many different reticle options such as Tremor 2 and so on. 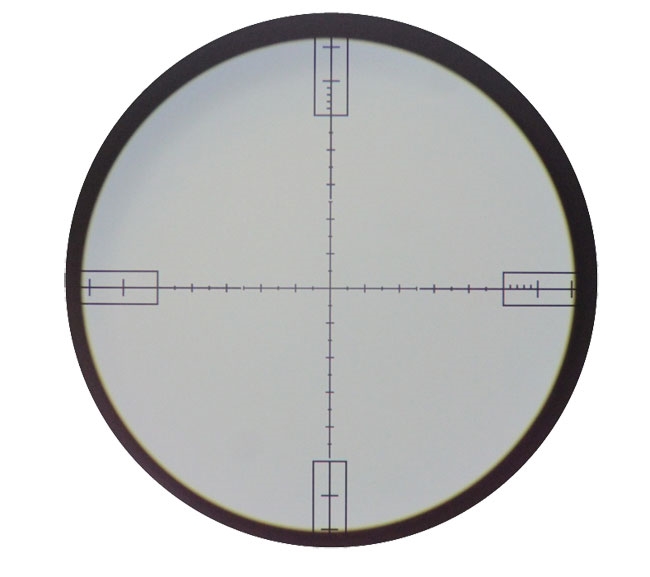 Like the reticle, so are the turrets – tactical. The clicks on both rifle scopes have 0.1 Mil of adjustment per click, and they both feature the MTC (More Tactile Clicks) feature. This is a very nice feature especially if using the rifle scope in the dark, since you always know when you are in a full number of Mills, for example, 0, 10 MIL, 20 MIL and so on. The click on these numbers is much harder and louder than other standard clicks. What we noticed here is that the clicks on the Hensoldt are much more audible and the feeling of them is much better than on this particular Schmidt & Bender.

Both rifle scopes have double turn turrets, and they both feature a zero stop function. Additionally against the Hensoldt, Schmidt & Bender features a locking mechanism, which can be engaged on any number of clicks, and this in both revolutions. Also the windage turret has this function, what is in our opinion a very handy feature, especially if you use the scope in a harsh environment, and you can accidentally hit the scope and change your setting.

When we come to the elevation, you see that the Hensoldt has 4 entire MIL more elevation in one turn than Schmidt & Bender, and 8 entire MILs more of total elevation adjustment range. Here we see what is the main benefit of the bigger main tube diameter – more elevation. On the Schmidt & Bender the entire elevation range is 26 MIL, and on the Hensoldt astonishing 40 MIL. This is 4 meters of elevation on 100 meters. Because of this great feature, this rifle scope is the perfect companion for some extreme long range rifles and competitions, where you shoot well over the supersonic range of your particular cartridge, and the bullet drop is extremely high.

Also by the windage turrets there is a difference, on the Hensoldt you have 18 MIL of adjustment (9 in each direction) and on the Schmidt & Bender only 12 MIL. Whatsoever we think both of them is more than enough, because shooting on such a strong wind is not really productive (too much possibility of unsuccess).

The main disadvantage of the turrets on these rifle scopes is whatsoever the small spacing between each click, what makes them very difficult to adjust precisely. After the MTC, it is very difficult to make only one click, almost everytime we made 2 or even 3 clicks at once. All in all, we think that the feeling of the clicks on the Hensoldt are better, are more audible and you can not make clicks accidentally so easily like on the Schmidt & Bender.

Another remark we have made on the Schmidt & Bender is with the parallax wheel, where we noticed a big difference with the marking on the turret, and the actual distance to the target. In our test for the optical properties, we had a target at a distance of 280 meters (measured with a Leica HD-B binoculars) but the parallax turret was adjusted on more than 500 meters. This means, that the numbers on the turret are not precisely calibrated for the actual distance.

Hensoldt, on the other hand, made a smart decision, because they made repeatable markings with 50m-<infinity on the entire parallax knob so the user always sees in which direction he is rotating the turret.

For both of them are many additional original accessories such as sunshades, honeycomb filters, laser protection and so on.

The warranty on the Schmidt & Bender rifle scope is only 2 years, but since this is a well known and well-established company in the field of Optronics, they provide great and not expensive service even for 30 years after the release date of the product. Hensoldt, on the other hand, provides a long 10 years warranty directly from the day of purchase.

The price of these rifle scopes is enormous, and no other rifle scopes in this magnification range are as expensive as these two. The MSRP of the Hensoldt is 5.591 euros and 4.499 euros for the Schmidt & Bender.

On both of these two rifle scopes is a writing ˝Made in Germany˝, and that is what we expect from them – High quality. We are definitely sure that these two are great rifle scopes, and optically they have almost no competitors (especially the Hensoldt).

The price for these premium rifle scopes is huge, and not many people can afford this kind of equipment for their precision firearms. With 5.591 euros for a rifle scope, this is the most expensive rifle scope we ever tested, and also the 4.499 euros of the Schmidt & Bender is enormous high. So for everyone who needs a high magnification tactical rifle scope with superb optical quality, this is definitely the right choice – if money is not a question.

But like every product, they both have room for some improvement. For example a locking function on the Hensoldt, or better-defined clicks on the Schmidt & Bender. Maybe even less weight for both of them would be great.

Our team comprises of two enthusiasts who write the articles for hobby and our very helpful unbiased friends who help us make the evaluations, such as the optical characteristics. As we are volunteers/enthusiasts we are not always present in the same numbers. Our ranks can fluctuate from 5 to around 8 people at the time of a test. Other than the two of us who are responsible for writing the articles our friends have almost zero experience in rifle scopes. They have no prejudice and are, as such perfect for our objective observations. None-the-less we always try our best to hide all the labels that can give away the products ID. For that reason, we mount the rifle scopes in parallel on a special stand and cover them so the brand names are not visible.

We accurately fine tune the parallax on all the testing products for observing trees and buildings at 280 m and each person sets the diopter for their specific needs.

In this article, we tested optical properties with 8 volunteers, which have no experiences with tactical scopes and have no bias towards any of these two brands. To be exact none of the volunteers even knew any of these two brands before the test. Both scopes were mounted in parallel and people observed trees and buildings about 280 meters away. Parallax was fine-tuned before the test and each person also adjusted the diopter setting for himself. From 8 volunteers 4 were women and 4 were men.