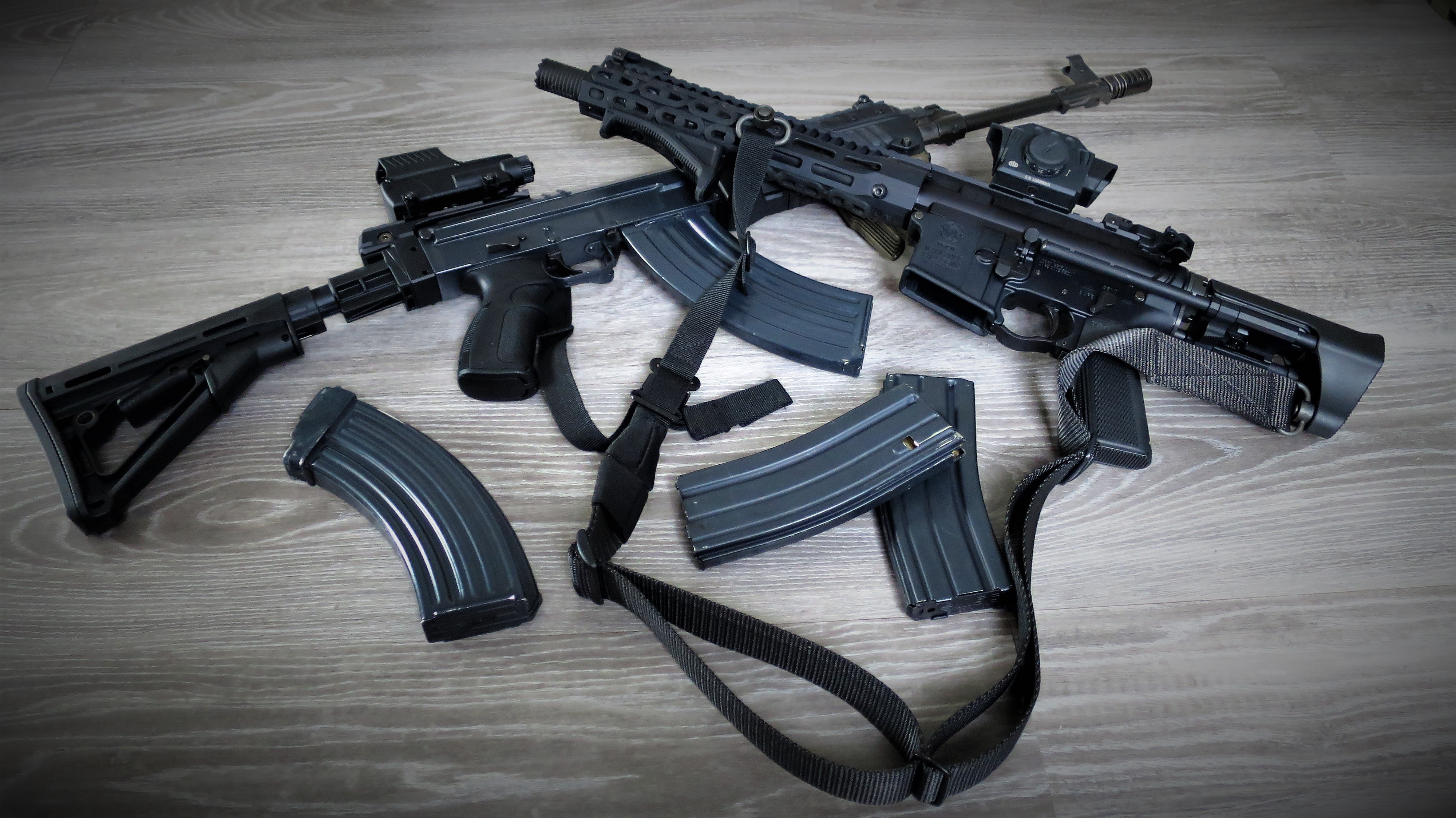 M5 and EG1 mounted on an AR platform

What we got in our hands are two interesting red dot sights that are claimed to be en-par with some of the best red dots available on the market. While their price range puts them on the same level as, for example, an Aimpoint or Eotech sight, the question that comes to mind first is if they are, in fact, worth it? We are talking about the DI Optical EG1 and the Meprolight Mepro M5.

Below you can read a comparison between the two devices. We listed and compared the general properties of both products below together with a commentary. We also strapped these on a Troy SOCC 10.5’’ rifle in 5.56x45 and took them to the range, to get the best possible impression, thoroughly test them and see what we would find out.

We first took a look at the basic build of the sights. The visual representation is very important on the modern market, starting with the packaging. The EG1 comes in a neat, hard black box with foam inlays, giving an impression of a quality product, while the M5 comes in a simple cardboard box that honestly does not do justice to the price and the quality of the device inside.

When it comes to the visuals of the devices themselves, the EG1 truly looks unique, unlike any other red dot on the market. It has a rugged, futuristic look to it that will definitely collect a lot of fans, and quite a few of haters as well. The M5 is a classic design and shape, which at times gives an impression of fragility.

While the EG1 is fairly compact in size, it gets quite high (just the right, ‘eye-height’ honestly) with the mount, but it is a bit heavier than the otherwise bulkier M5. The problem with the latter being that it is very wide, wider than most rifles, and therefore more exposed to getting bumped into stuff around you (the listed width of the EG1 is due to the large brightness setting button on the left side).

Both the EG1 and the M5 are not amongst the cheapest red dots out there, in fact, they are towards the top when it comes to the price range. The first, visual impression only does justice to the EG1, while the M5 at times comes off as a cheap product, looks-vise that is. Both come with the mount included in the package, as well as batteries.

As a tubular red dot, the EG1 could come with lens covers, but it does not, it does, however, come with included and attached rubber hoods that help reduce glare and might also provide some protection against impact. The M5, being an open sight, does not come, nor does it need any lens covers. In the box with the EG1, one will also find a small tool with which you can open the battery compartment as well as adjust the windage and elevation of the dot. The M5 does not come with such a toll. The cap of the battery compartment can be unscrewed by hand, but you do need a tool to adjust the dot, and you will have to bring your own to do that.

Both sights have about the same battery life of about 5000 hours, which seems fair, but there is some fine print. The EG1 will last 5000 hours at mid-setting, while the high setting will give you up to 2000 hours, and the low just above 9000 hours (so it is claimed). Meprolight, however, lists their battery life at the lowest possible setting. At this point, it is worth pointing out that while both devices have adjustable brightness, but EG1 has 15 (11 normal and 4 NVD compatible), while M5 has 4 (3 normal and 1 NVD compatible)*, therefore the EG1 gives you much more versatility and ability to adjust to your environment, even when using NV goggles.

While we did not have the liberty to test the ruggedness, resilience and water resistance of both products, we can check out the claims of their producers. DI Optical claims that their sight can be submerged to 1 meter of depth, while the M5 is only ‘water resistant’. The EG1 is also shockproof, and in all fairness, it does seem as it could take quite some punishment, the M5 does not give the impression that it could survive a hard knock on the noggin, and the producer describes it as 'rugged' but not shock-resistant. All of this might reveal the reason for DI Optical offering a 5-year warranty on their product, while Meprolight only offers 2 years.

Like most red dot sights, the EG1 and M5 are both parallax free, but we all know that no lens or glass is completely free of it. Yet, we can easily say that both sights are incredibly close to that, and the distortion is minimal, making it very easy to hit with them, at most distances (feasible for a red dot sight, of course), and at any angle. When moving your head, the dot on both sights seem to stay on target as much as possible and follow your view nicely, but the EG1 does that better, yet sadly, when speaking of optical properties, it has one big problem we cannot put aside.

When discussing the lenses, it must be said that both devices have a high-quality glass with very clear and sharp image. The M5 has an incredible field of view and a very crisp image, while the EG1, being a tubular sight, has a field of view that is a bit narrower, but a very clear and bright image. There is a reason for that and a very important for that. The Meprolight is, like most other red dots, slightly tinted, while the EG1 is not. That is a double-edged sword. The tinting of the lens allows for a greater contrast of the dot on the target surface and makes it easier to acquire a target. But, the fact that the EG1 is not tinted, means that the image and colors are more 'real' and even more importantly, the sight as such lets more light to pass through it. That again has some good and bad effects. The good part is that it can be used in bad lighting more easily. The bad part is that the dot lacks contrast and on a bright day, most settings except the brightest ones are all but useless. This can, of course, be mitigated by putting it on higher settings, but that eats the battery much faster.

And at this point, we need to discuss the above-mentioned problem, a big one for the EG1. While it is inevitable that you get some glare and reflection from any light coming from behind you with any lens, even with the best coatings, what the EG1 displays is really bad. While standing in front of, let’s say a window, with the M5, you get a bit of a reflection in the lens. With the EG1, you can see the window clearly, as well as everything outside of it. Some might say it is a tactical advantage to see what is behind you, but all jokes aside, it is something we would rather do without.

Since red dot sights are named for that one little thing that makes all the magic happen, the dot, we cannot go without saying a few things about them. The dot on the DI Optical sight is 1.5 MOA, which is fairly small and very useful on a rifle, even at greater distances. It is also very sharp, a nice dot and not a blob, but it does develop a bit of a halo at higher settings when aiming at closer targets.

The M5 has a 1.8 MOA dot, which is slightly larger than its adversary, but it seems much larger at the highest setting when it, sadly, turns into a slight blob. This is something that, at this price, should not happen, as one would expect the dot to be as sharp as possible.

As mentioned in the introduction, we took these two boys out shooting as well. We strapped them on an AR platform, and this is where we noticed our first little, but annoying problem. The M5 has a QD mount that is simply perfect, while the EG1 has a standard mount that fits and holds nicely, but at times the mount seems too small for the rail and gives you a bit of trouble to attach. The knob of the screw is very large and easy to grip, which is a good thing, but it sticks out quite a bit and might present a problem when mounted just above the ejection port.

As we started to zero in the sights, both sights proved very easy to zero, with reasonable click values. The 'knobs' are simple and accessible. If you do not use a rest for this, the M5 has an annoying feature of its own though, the fact that the elevation and windage knobs are not on the same side, forcing you to keep turning your rifle sideways for every adjustment (the windage button is on the left, while the elevation is on top), while the EG1 has them both on the right side, so you can manipulate them even when laying down, without letting go of the rifle.

Anyway, we move on to the shooting part. Both sights are very fun to use. As discussed above, they offer large fields of view, a great image and they just make it easy to hit. The Mepro has a slightly low lens and it makes it a bit harder to put the dot on target then the EG1, but not much. The EG1 thought, performed beautifully, with a sharp dot that was just too easy to put on the spot. The one minus that was noticeable is that the brightness adjustment knob is very big, which is good when you need to use it, but bad all the time when you don’t. Why? Because it is located on the left side of the sight, and due to its size, it does take away quite a bit part of the view from your left eye (for right-handed shooters at least).

‘The good, the bad and the ugly'

To sum up and conclude. The sights are well made, yet the M5 has a cheap feeling to it, while the EG1 gives the impression of quality. It just feels right and durable when you hold it. Both have very good image quality as well as dot brightness, but the Meprolight dot could be sharper. That being said, both have their set of problems, while M5 does not seem so durable, the EG1 gives the impression that nobody thought of the user experience when designing it (with the huge knob and image reflection). But that being said, both are good, both are fun to shoot with and both are very usable. And while the two are well worth their money, that might be where their largest liability lies. It will be hard, especially for DI Optical, being less known, to compete in the price range that they set for them, with the other, established brands that reside there, even though they might even surpass some of them in certain characteristics.